Getting Green Issues back into Social Struggle 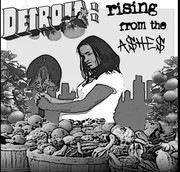 In the wake of the economic crisis, and with massive public sector cuts threatening our very social fabric, Capitalism is once again sweeping urgent issues of environmental sustainability and climate change under the carpet – promising to destroy not just our lives but our planet too. Some are calling for a Green New Deal as a positive alternative to Austerity. But wouldn't such top-down, state and capitalist driven solutions only defer the problems of social justice and environmental sustainability? Are there other, bottom up, people-driven answers out there, and are they a preferable route?

With two films by the Reel News Collective:

The hopeful, real-life story of an urban community‘s Green Self-Empowerment in the face of post-industrial dereliction: Detroit’s residents, confronted with the urban, social and economic decay left in the wake of the ongoing Capitalist Crisis and swingeing public service cuts, have taken matters into their own hands, reviving their communities through a thriving patchwork of urban farms where Detroit’s residents have cultivated not just organic food, but also social ties, mutual aid, and artistic expression.

Recounting the start of a major campaign backed by Trade Unions and environmental activists, arguing that the cuts are unfair, unnecessary and unacceptable. Instead of massive austerity measures and swingeing public sector job culls, the campaign fights to create a million new jobs with a Green New Deal to lower carbon emissiopns and kick start the economy.