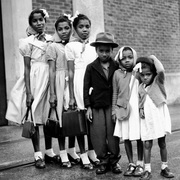 We would like to invite you to Bernie Grant Arts Centre’s Windrush Festival (13 - 27 June) - our first ever festival highlighting the vital contribution the Windrush Generation and their descendants have made to the cultural landscape of the UK. Windrush Festival will be a two-week long programme of artistic activity with a packed calendar of performance, literature, music, cinema, workshops, food, talks, debates and much more.

Our Windrush Festival kicks off on 13 June with a talk with the Rt. Hon David Lammy, MP for Tottenham since 2000. He has been at the heart of the campaign for justice for those wrongly deported and detained as a result of the Windrush scandal. Join us for this very special in-conversation as he talks politics, activism and why a hostile environment affects us all.

On 21 June New Daughter’s of Africa – Margaret Busby’s major new global anthology of writing by over 200 women of African descent, comes to the Bernie Grant Arts Centre with an evening of literature, poetry and prose by women of Caribbean heritage, including Andrea Stuart, Dorothea Smartt and Zadie Smith.

We’ll be celebrating Windrush Day on - Saturday 22 June - with a packed programme of FREE music, dance, talks, and workshops.

TODAY! To close the festival, we're also screening the National Theatre Live stage adaptation of Small Island on 27 June. Andrea Levy’s novel embarks on a journey from Jamaica to Britain, through the Second World War to 1948 – the year the HMT Empire Windrush docked at Tilbury.

The BGAC Windrush Festival will be a unique moment of reflection and celebration, we can't wait to see you there!