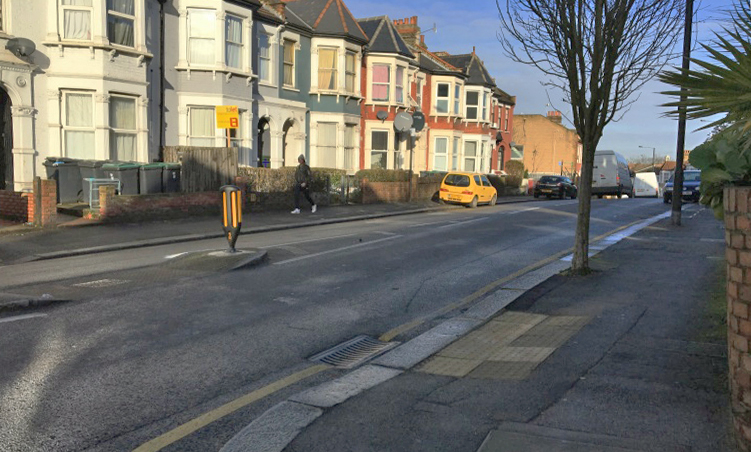 As usual nothing to google. Plans are to propose parking on one side only, and get rid of the pedestrian islands, creating an environment for greater traffic flow. I would demand speed control cameras, not many vehicles passing through obey the 20MPH speed restriction.

Stoke Newington have installed one on Green Lanes north of Manor House.

What about our children crossing to get trains from Hornsey & Harringay Stations, or those getting to South Harringay, North Harringay, Hornsey School for girls, Heartlands, or Highgate Wood.

I believe there is a  meeting tonight at:

Do you know the date?

are these changes in preparation for the increased amount of traffic expected when they pedestrianise the High Road and push all the traffic along Mayes/Mary Newer Roads?

Where did you hear of that?

all part of the HDV, isn't it? High Road closed to traffic so traffic is sent along Mayes/Mary Newer through a new road. the assumption is, i guess, that people turn left down Turnpike Lane, but you would expect southbound drivers to continue along Wightman.

The workshop was for the steering ctte stakeholders last night. The public consultation will be towards the end of Feb, the work itself will apparently start in April as it is planned to come out of the 2017/18 budget.

Pavement parking will be removed. It should never have been introduced in the first place as it reduces available pavement width for pedestrians to less than government design recommendations.

The informal crossings with "pedestrian refuge islands" will also be removed. They should never have been built in the first place as it reduces the carriageway width to less than government design guidelines (creates dangerous pinch points for cyclists).

New informal crossings will be introduced - made of anti-skid red paint. I think these will be fine on the side roads where traffic volumes and speeds are lower and cars will often give way to pedestrians (as they often do at the passageway for example). I'm not convinced red paint to encourage crossing on Wightman itself is a good idea - it encourages pedestrians to believe it is a safe place to cross, without any corresponding indication to drivers that this might happen. Pedestrians will have to wait for a gap in the traffic in both directions before crossing, and hope they get to the other side in time. We asked about formal, controlled or signalised crossings, but the officers didn't think they had the budget, and also it would interrupt the traffic flow...

So, in spite of Haringey transport strategy supposedly prioritising walking and cycling, the council is still unwilling to reduce car domination of Wightman Road.

The pedestrian refuge islands may " create dangerous pinch points for cyclists " but they make it possible for pedestrians to cross the road in relative safety.

That's right John. The islands have to be removed to make cycling safer, but they then need to be replaced by provision for pedestrians to cross safely. The easiest way to do that would be to reduce the traffic volume on Wightman. There are current peaks around 1400 vehicles per hour, or one vehicle every 2.6 seconds on average. Can you cross this road in 2.6 seconds?

A harder or more expensive way to do it would be more controlled crossings, like zebra or signal-controlled. Zebra crossings are not recommended where traffic flows exceed 500 vehicles per hour (which makes me wonder why the council is proposing the red paint uncontrolled crossings!), so that leaves signal-controlled. These are more expensive than zebras, maybe £50K each. At the very least I'd suggest one roughly at the top of Mattison (on which there is a school) and one at the top of Allison (which would make sense given the entry to the New River path on the other side) would give roughly equally-spaced controlled crossings between Hornsey and Harringay stations.

It will be expensive and still not ideal for pedestrians but the council is determined not to do anything to reduce traffic flow...

The "killer" for the bollards in the gardens was peak flows of 600 vehicles per hour on Warwick Gardens.

A lot of time last night was spent on discussing the issues that the proposed new Wightman parking arrangements might raise for pedestrian safety.  A number of comments and suggestions were made that might lessen the negative impacts.

Haringey seem to be relying on the assumption that drivers will slow at the proposed informal crossings to allow pedestrians to cross. My sense is whilst some drivers might slow a bit, the general speeds and volume of traffic will increase problems for pedestrians once the islands are removed. I believe that most motorists won't recognise an 'informal crossing', still less would they know what to do with one if they did (in fact the Highway Code makes no demands of motorists in this respect).

To take the optimistic view, as one person pointed out, Haringey's data show that at its worst Wightman Road parking is only at 50% of capacity so the proposed loss of space on the road will not require drivers to relocate to rung roads.

However, on a pessimistic note, I have reason to question the accuracy of Haringey's recently gathered Ladder parking  data. I checked my road last night shortly after the meeting. It was a time at which parking is at its maximum. With just one mini-compact space available, in fact it gave a prefect opportunity to assess the road's true parking capacity.

Whilst Haringey's data accurately reflected the number of cars parked on the road late on a Monday night (their 128 vs my 129), it overestimated capacity by 14%. This meant that the "stress' level they calculated at 85% (in other words parking at 85% capacity) was more realistically at 99%.

The difference in Haringey's capacity assessment and mine might be in part be due to there having been five empty disabled spaces (in which case their capacity overestimate would be 10%), but I suspect that in the main it's because, as I understood it last night, Haringey calculate capacity by dividing the total length of the residents' parking bays on a road by the length of an average car. Of course what this method doesn't allow for is 'inefficient' parking where spaces between cars far exceed the assumptions.

All in all, there was a positive response to the new parking arrangements, but there is real cause for concern both about the ease and safety of pedestrian movement on Wightman as well as potential parking issues on the rung roads.

I've asked for soft copies of the parking data and will publish them when I get them.

I agree, re accuracy of parking data. I can't speak for working hours during the week, but in my street of an evening and first thing in the morning it is nearly always above stress levels. Their data suggests it's nearly never the case.

Cars need to slow down.  Why don’t they put in speed cameras?   This is hard for people who live on Wightman Road and have to have a car for work.  What are they to do?

The also said that volumes were finally back up to what they were before the bridge closure.