The State of Harringay's Hermitage Brook & the Desire for its Culverting

I noticed an interesting short light-humoured article with a serious message in a 1903 copy of the London North Mercury & Crouch End Observer. It consisted chiefly of a (pretty poor) rhyme which used the fate of the Hermitage Brook as a way of highlighting some contemporary local concerns.

Its overarching theme was the state of the brook itself. As urbanisation overtook the countryside around London, its many waterways were badly mistreated. The Hermitage Brook, which used to run from Crouch End  Hill to the River Lea, was no exception.

The bucolic world depicted by water-colourist Harold Lawes in the painting below in 1883 was soon to be swept away. The picture shows the view looking west along Hermitage Road towards Green Lanes. On the right in the distance is one of the kilns of the Williamson Potteries. Although most of the Hermitage Brook to the west of Harringay had already be covered over, its eastern stretch still flowed. Its course is marked in the painting by the line of trees on the extreme right of the picture. 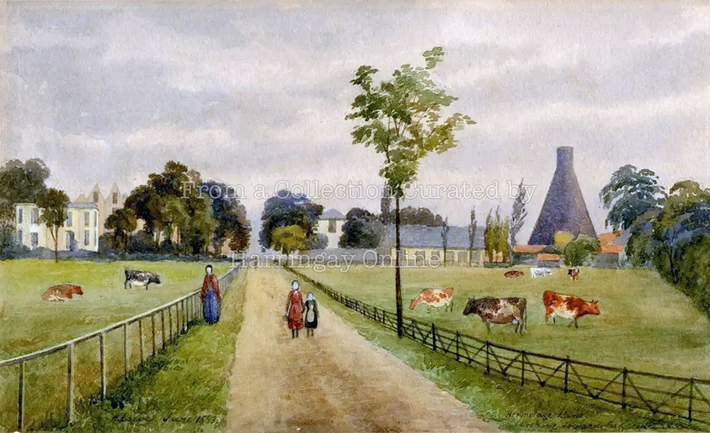 By the time that the 1903 article was published, the scene looked more like that depicted in the photo below from 1897. It is shot in roughly the same direction (you can make out the tile kiln behind the central tree) but the view is rotated to look in a more north-westerly direction. Behind the tree on the left of the picture are the new buildings on Green Lanes. Just to their right, you can make out Harringay Bridge. In the distance to the right of the central tree is, I think, the station building. 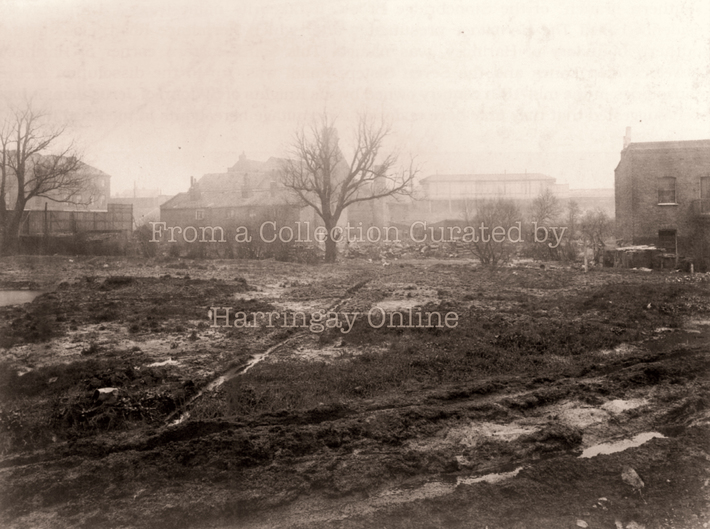 Somewhere in the scene, the brook still runs, but according the the rhyme it is now stagnant and strewn with rubbish. Elsewhere on the site was a pond, the site of several tragic deaths of local children.

Much to the chagrin of local residents and managers of St Ann's Hospital, the area to the right of the picture was used as a rubbish dumping ground by the dustcarts of Stoke Newington Council. It took many years for Tottenham Council to stir itself into action and prevail on its neighbour to stop dumping. In the meantime, the state of the site continued to deteriorate.

The mention of "Hill's town" in line 7, is referring to the Gardens and Grand Parade which had recently been built up by John C Hill.

It's interesting to note how over a century ago respectable opinion sough the culverting of rivers, whilst today the move is is clean and open them (props here to the Haringey Rivers Forum for its work on improving the Moselle).

Fascinating. Thanks so much Hugh. This is the first time I have seen what the Potteries looked like, too.

There are a few more glimpses of the potteries here, Sally.

Very timely research Hugh. Friends of Chestnuts Park are now 6 months into our research about whether to daylight the Stonebridge Brook, Haringey's second largest river, which partly runs under the park. We've had two major meetings of partners including Thames Water, Thames 21, the Environment Agency, Haringey Rivers Forum, LBH Parks and LBH Flood Prevention Team. Parks commissioned a survey of the culvert under the park which took place in January and we have some fab pics from inside the big culvert which is visible as it runs diagonally across the park from the Blackboy/St Ann's junction to the end of Falmer Rd.  Further studies are needed to actually find out where the Stonebridge currently runs as the big culvert doesn't seem to carry the main waters from the Brook, but a parallel Victorian brick culvert was visible through a channel entering the big culvert, which carried a serious water flow. This culvert seems to follow the original route of the river.

We've now got a £2k grant to prepare an initial feasibility project, and are also going to be working with students from several universities. As Friends, we want to improve the condition and drainage of the main playing field in the park as the drainage system installed there 20 years ago has now failed. If at the same time we could also create a small wetlands area and improved drainage from surfacing the Brook within the park, then that would be great and achieve an improved pitch area, a SuDS (sustainable drainage scheme), and increase the biodiversity of the park.

As you probably have done, we've been getting historical info from "Haringey's Hidden Streams and Rivers". The Hermitage is a tributary of the Stonebridge and joins it east of the park at the junction of Culvert and Grove Roads.  Both of them rise in Crouch End, with the Hermitage rising to the South of the Stonebridge and both streams making parallel routes from East to West until they join as one at Culvert Rd.

If anyone wants to know more, or to get involved, do email us at friendsofchestnutspark@hotmail.co.uk. For a great example of the successful daylighting of a stream, go to Firs Farm Wetlands in Enfield, just off the A10 http://www.firsfarmn21.org. Just a short bus ride from Turnpike Lane.

Hi Ceri, If a part of Stonebridge Brook can be uncovered, that would be great.

On the 1893 OS map, the brook seems to run mainly outside of the park, with only a short stretch just inside the north western corner. Does that seem to match either of the flows recently discovered? There are lots of possibilities to explain what you're seeing underground, but here are a couple.

The first is early Twentieth Century. The two snippets below refer to discussions about Stonebridge Brook; the first, from January 1899, is about a decision by Tottenham District Council; the second, from March 1913, ia about actions agreed by Middlesex County Council. 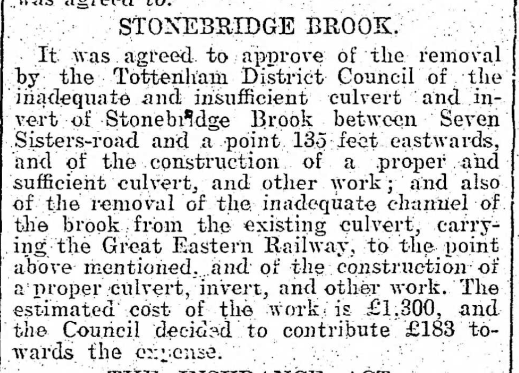 A second possible explanation for what you're seeing is to be found in the the 'Hidden Rivers book you refer to. It mentions 1961 culvert improvements between St Ann's Road and Markfield Park to deal with flooding.

Given more time, I'm sure it would be possible to find out more detail on the history behind the 'Chestnut culvert'.

I'd love to see a couple of the photos you took, either by your posting them here, or by email.

As is evident from the above, I do have a copy of 'Hidden Rivers' and it's a useful source. Where I can, I prefer to go back to original material. That's what I did in the main when looking at the Hermitage piece and this one. But the book is a great place to start.

By the way, I have a colour copy of the Lawes watercolour on page 66 of 'Hidden Rivers' - painted form the top of the hill between Allison and Hewitt - black and white version here.

REALLY interesting! We've been trying to date the creation of the part of the culvert/s which pass under the park.

Yes, your map is similar to ours, with the original course of the river passing under the North West corner of the park, then flowing along Falmer Rd towards Culvert Rd where it's joined by the Hermitage Brook.

So interesting that "Old man Rowley", as he is described by one of my older neighbours in Cranleigh who knew him, the builder responsible for most of Woodlands Park Estate, lobbied for the river to be culverted.

We (Friends but also Thames Water) had presumed the Brook was now contained in the large concrete culvert which now runs from the Blackboy/St Ann's gate diagonally across the field and exits into Falmer Rd. It's now very visible as it seems as if the pipe is heaving out of the ground. In fact, even on your aerial photo, it's visible as a yellow line. See pic 5431 attached.

The parks dept commissioned a survey of this culvert because they are responsible for it as it passes under parks land, and there was a fear that it would be cracked or broken if it erupted any further.

I will email you this culvert survey undertaken on 8th Jan this year. One part of it is in a zip file which I'll email but the other docs are so big they were sent to me via a We Transfer link which has now expired. I'll ask Glynis of the parks service to send them again to you.

It turns out that the big erupting concrete culvert is mainly a storm drain, with very little water running in it. Encouragingly, it doesn't smell too bad, so there's not too much domestic misconnection contamination. But, enticingly, near the North End of the park, along the course of the original river, a parallel culvert made of small Victorian type bricks, containing free flowing water, was visible (and audible) via a side channel leading into the concrete culvert which takes overflow from this Victorian brick culvert.  See pic 5463 attached.

Our second meeting with LBH, Thames Water etc last month, concluded that this is probably the Brook. You can also hear running water in all weathers from the street drain at the junction of Etherley/Cranleigh, so that's probably the same brick culvert. Thames Water are conducting a London region wide survey of lost rivers, which will be published next January, and we hope to learn more from this. We conjecture that the Stonebridge may travel in rainwater type drains/culverts quite near to its original route under Conway Rd etc.

The Friends now have a £2k grant to to set the initial stage for a big feasibility bid from LBH Flood Prevention Team to the Environment Agency later this year towards creating a SuDs in part of Chestnuts Park, and as a result levelling and draining the rest of the playing field so that it's fit for purpose again. Am in the middle of writing that detail on this £2k bid, deadline Wed. Urbanism students from Delft uni and also from UCL are interested in working with us on it. If you or anyone reading this knows anyone else interested in getting involved, email us friendsofchestnutspark@hotmail.co.uk.

It might of course all be impractical or unfundable.  If that's the case, then we'll have to start fundraising to other sources to get the main field levelled and drained in a conventional fashion. It's currently almost unuseable and an increasing problem. But the dream is to surface the river in a small wetland area of the park, and have the playing field drain into it, thus creating a new biodiverse wetland AND getting a decent playing field again!

Edited note: not sure my pics have uploaded as they're too big. Will try and load individually now This pic was taken via a concrete side channel from the big main concrete culvert. You can clearly see (I hope) the small red Victorian bricks of a smaller parallel brick culvert carrying a flow of water. We believe this to be the Stonebridge Brook. 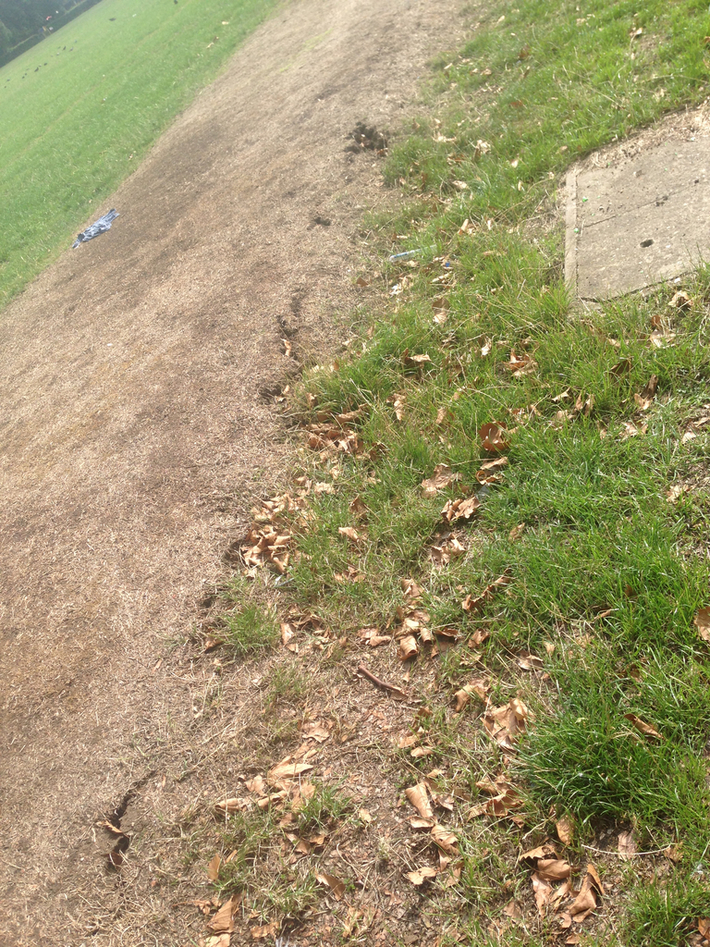 This pic shows the big concrete culvert which crosses the park diagonally and is rising up out of the field/the ground beside it falling down.

Thanks Ceri. I've adjusted the photo a bit so it's easier to see to the other end of the pipe. From that admittedly blurry view, I wonder if the bricks look more modern, with a layer of modern concrete on top- perhaps the 1961 work? (Click on the picture to enlarge). 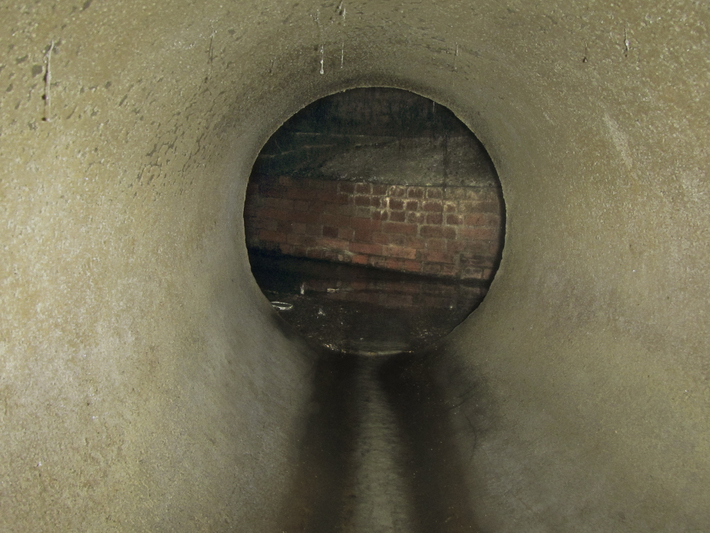 Thanks for offering to send me the files. Did you realise that the unbranded version of Wetransfer is free (and very easy) to use?

Just written long reply and posted two pics but forgot to ask this question - is the Lawes watercolour of the New River or the Stonebridge?

In the Lawes painting, you can see the New River where it passes over the Stonebridge Brook. But there's nothing to be seen of the Brook itself.