Can You ID these Buildings Visible from Harringay?

I was looking out of my home-office window the other day and realised that I couldn't identify a couple of buildings in my skyline.

Both images are shot with at 200mm lens plus a 1.4 magnifier. So don't be fooled into thinking the buildings are that close.

The first image is shot in a due southerly direction from the Ladder. It shows two tall buildings, one further away than the other. I've left in the eastern edge of the roof of St Paul's Harringay as a reference point (behind the chimney stack on the far right of the picture). Because of the location of the buildings relative to St Paul's Harringay, neither of them can be the new buildings by Finsbury Park Station. 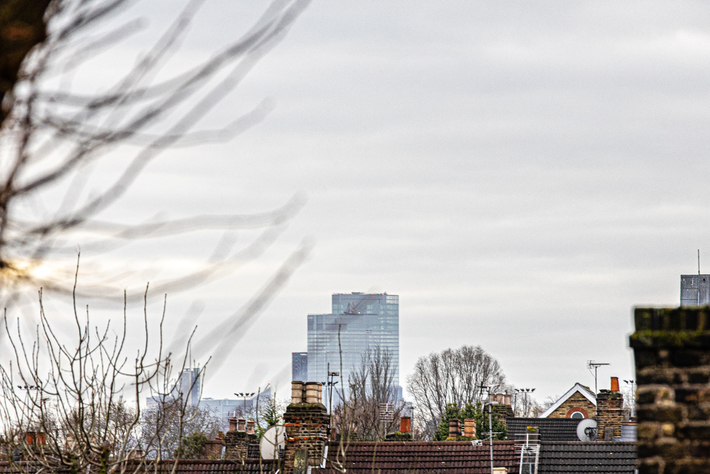 The second image is shot in a south easterly direction. You can see the chimney of the old Maynards Factory in the Harringay Warehouse district. I previously had a view of One Canada Square at Canary Wharf, but the Woodberry Down development put paid to that. So I was delighted to see that the ArcelorMittal Orbit is just visible in this photo (to the right of the red brick tower).

Any idea what these buildings area?

Not sure about the first, but the second is definitely these.

Well done. That looks bang on for the second set. And I guess that means the building behind the ArcelorMittal is the Halo Tower.

Can't fathom the first set though. OK got it, the big building in the front is 22 Bishopsgate. The one behind with chevron pattern is the Leadenhall Building.

Looking at Google Earth I couldn't figure out how a couple of buildings in the City could appear isolated like that. Seems that their models are out of date.

The pointy thing in the bottom-left of that image must be the Scalpel, which is approximately the same height as the Guerkin and NatWest tower. These new buildings are huge.

Thanks, Ian. My neighbours three doors up can see the Shard from their back bedroom. But no sign of it from mine. Long distance views often seem to confound expectations.

From what I can see, the Scalpel rises to a single point. There's a further lighter coloured point behind it. Geographically, that's just where the Shard should sit. Could that be it?

I hope that's a camera effect causing the lean to the Maynards Factory Chimney!

Got to say that as a long term local resident I really detest the recent renaming of my area as Harringay Warehouse District. It's an annoying Americanism that totally ignores the manufacturing history of the area. Just cos it's on Google doesn't mean it's right or accepted by those who live here.

Annee
It's on Google because someone (or someones) claimed that was the accurate name. It's estate agent / developer Newspeak. Though many of the U.S. examples were warehouses.

The re-naming of place names is a fascinating topic. History is rewritten and renamed across empires and colonies. In Brian Friel's play Translations, the English are rewriting the Irish place names in a similar way that villages and towns and cities underwent name changes after European wars. In some other places - parts of Israel/Palestine for example - the rubble of former buildings is covered by new forest with added new place-names.
Compared to this does it matter that a few former factories near the Seven Sisters Road get a fake history as warehouses? After all, isn't it just artistic licence? A bit of creativity making the world a more alluring place?
Why bother at all with truth if land can fetch a few quid more with a rebrand and rename? Blue plaques on every house. Peerages and coats of arms for all! The House of Lords is conceptually large enough for an infinite number of primates.

Actually, Alan, to the best of my knowledge, the appellation Warehouse District came from the folks actually living in the converted factories.

Because the people who moved in weren't local, some of them used Manor House Station as their wayfinder and so referred to the area as Manor House Warehouses. Others were more historically accurate and used Harringay.

As far as I'm aware none of the old factories in that part of Harringay has been marketed through estate agents, either to rent or sell. I think they tend to rent through Gumtree, Facebook or by word of mouth.

As much as referring to part of Harringay as Manor House might not be my choice, I suppose we can't feel too unsettled by an area's residents giving it a name of their choosing. As far as I'm concerned, their name recognises the 20t century nature of the are. I'm not too inclined to get upset over the precise words they choose.

Annee wrote that: "as a long term local resident I really detest the recent renaming of my area as Harringay Warehouse District."

Don't long term residents get any say in the renaming? Somebody wrote the Wikipedia entry which repeats the same amended history. Does anyone know where any actual warehouses stood or stand?

Hugh, you are careful and respectful in exploring and presenting the accurate factual history of Harringay and its wider neighbourhood.

Can I suggest a thought experiment you may like to try? Imagine that several hundred new residents moved into Ladder Roads and decided to refer to and ask Google to label the area "East Crouch End". Or perhaps "North Finsbury Park" And then wrote this up on a Wikipedia page. Claiming - along the same lines as the current page about Harringay Warehouse District that: "East Crouch End and North Finsbury Park neighbourhoods developed in the early years of the twentieth century".

I don’t think the new residents proactively sought any renaming. They just used an appellation that was relevant to them. I’m sure they didn’t imagine for a moment that the name would be picked up.

Alan, I’m in a very good position to understand what it feels like to have an area renamed. Remember after all that I live in Harringay. Getting the council to recognise that such a place exists seems impossibly difficult. Nilgun, bless her cotton socks, told me that no such place exists. It’s called Green Lanes, she said. Judging the Council by their actions one has to assume that this is as good as recognised as Council policy.

the area of Harringay to the east of Green Lanes and between the Barking Line and the New River was without a doubt characterised by light industry through the first three quarters of the 20th Century. The way it developed probably originated in the siting of potteries/tile kilns in the eighteenth century.

I suppose I picked up in the name used by the 'warehouse residents' because it honoured the indsutrial history. I guess it doesn't have to have a name, but it is a definitely identifiable part of the neighbourhood, just as the Gardens and the Ladder are. So it will inevitably be referred to as something. Does anyone have any alternative suggestions?

The residential conversions around Hermitage / Vale / Eade Roads have been going on for at least a couple of decades now, so it's well established as a residential community of around 1,000 people.

As Hugh suggests, I guess the "Warehouse" moniker was coined to help establish a cohesive community and geographical identity and it's not entirely incorrect. The ExFed building, for example, is exactly what the name suggests, and many of the other buildings will have been used for warehousing and distribution as part and parcel of light industrial use.

Those of us who don't live in a converted warehouse (or factory) are still free to call the area by the various other names which have become attached to it over the years. It's useful to have "warehouse district" or "the warehouses" as a concise way to refer to that specific part of the area.