...or Queen Anne's Lace, as it's also known, which is growing profusely at Railway Fields at the moment. It is is attractive to a huge number of creatures, including orange-tip butterflies and  marmalade hover flies. It can be eaten by humans too, who add the young leaves to salad as "wild chervil" 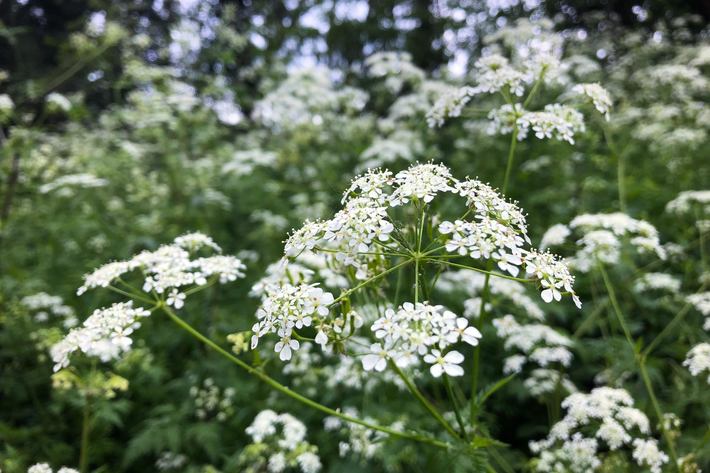 Rather more sinisterly, another folk name for the plant is 'Mother-Die" because in many parts of Britain it was believed that to bring it into the house would cause your mother to die. There are a couple of theories as to why this would be, one possibility is because it resembles hemlock so you could easily poison yourself,

"Cow parsley – called mother’s dead in Yorkshire/Lancashire, 1930-45ish.  Might be because it resembles hemlock [Conium maculatum] and might be picked by mistake.  ‘Never bring it into the house.’  Also known as Queen Anne’s lace " [South London Botanical Institute, June 2015].

or because of its association with graveyards where it often grows in abundance,

"As a child in the Ipswich district I always called cow parsley dead-man’s flesh – I assume because so much of it grows in grave yards. I didn’t know of any other name for the plant until much later" [Museum of East Anglian Life, Stowmarket, Suffolk, September 1985].

Although it has been a prominent verge plant for centuries Anthriscus sylvestris has become much more prolific in parks and green spaces in recent years, a phenomenon that may be due to the way air-borne pollution from traffic fumes and fertilisers add too much nitrogen to the soil forcing out smaller more delicate plants and favouring robust plants like cow parsley. For this reason, TCV work on the site includes keeping the cow parsley at bay.

Even with this knowledge, it is hard, however, not to entranced by the sight of the waving stalks of cow parsley and the overhanging hawthorn blossom, once described by Dante Gabriel Rossetti thus:

Come experience some "visible silence" at Railway Fields this weekend.

I love cow parsley. To me it is so emblematic of the British Countryside.  I'll definitely come on down to RF and revel in it. Thanks for the tip.

It was considered very bad luck to pick and bring it into the house where I grew up in the North East.  I think my Mam used to call it Old Man’s Beard.

I always understood Old Man's Beard to be white headed, wild clematis which grows in hedgerows. Another beautiful native plant.

I think you are right Saddic but folknames can be quite flexible and highly regional so it’s possible that in the North East it had that name. Mabey’s book Food for Free lists about 15 regional names for this plant (although not Mother-Die interestingly despite his flagging up the dangers of mixing this flower up with hemlock)

Is this the stuff which is poisonous to horses ?

I think you may be thinking of ragwort, which we also have at Railway Fields, it’s the preferred food of cinnabar moth caterpillars.