I'm new to HoL, sorry to start off with a moan, but I wondered if anyone could offer some advice...

We're on Wightman rd, next to a house converted into 6 bedsits. Lovely landlords have failed to make any space for wheelie bins, so they just have the one, and a giant hedge behind which crap accumulates. Not much cop for potentially 12 people.

Earlier in the summer, with the addition of most of a divan, an impressive crap mountain appeared behind the hedge. I spoke to the council and they got it sorted. But since then, the wheelie has moved to the pavement (I think there's a couple with a baby, they're probably having trouble getting round the bin) and crap mountain has re-formed around it.

The torn bags (thanks various two and four legged scavengers) get re-bagged so someone cares a bit. The mountain gets cleared occasionally, but is back quickly and the present mess has been there for what seems like ages. It's depressing to see every day (and smell) and there's also the mice which keep eating their way into my flat.

There is a high turnover of tenants, they aren't particularly friendly and the landlord is clearly doing the absolute minimum possible. I am unsure what the council can do, as essentially the problem is a combination of none of the tenants having the capability/urge to deal with recycling and insufficient storage for the amount of refuse. They've said they can't make the landlord make space for more bins and I don't think a leaflet on collection days is going to sort it.

So, what can I do? Anything? Suggestions most welcome...

You have my total sympathy. One question - at the end of your post, when you say "they've said they can't make the landlord make space for more bins" is this what Haringey have said? If so that seems crazy - if you're a landlord surely it is your responsibility to ensure your tenants are able to get rid of their rubbish properly. If they then choose not to, then its seems only right to deal with the tenants - but if the tenants haven't got the facilities to do that then you'd hope the council can do something about the landlord. At the very least there need to be more bins - and I don't think it's appropriate for any of them to be on what is already a very thin pavement.

In terms of what to do, have you tried any of our local councillors - that would be my next attempt. If you've still got it, include details of your previous correspondence with the council. Their details are on the site via one of the tabs at the top. Good luck!

Sorry to hear this. I suspect I know the property you live next to, I have reported the rubbish build up and the ripped open bags twice this week and the were still there on Friday! I was the ward councillor until May and I am continuing to work with the council and Veolia on this particular property to resolve the issue of bin storage and accumulating rubbish. If you want to get in touch with the exact address (I don't want to make it public on here) I can update you with what I have done so far and work on a solution. My email address is Karen.alexander.haringeylibdems@gmail.com.

Thank you, that sounds great. I'll drop you an email in the morning.

Yup that's exactly what the council said. I would've thought providing sufficient space for refuse would be a basic requirement when converting your house into a human sardine tin but apparently it's not compulsory. Another instance of tenant rights being waaaaay down the agenda.

I was planning to have another go with the council and will then move on to councillors I suppose. I've been a bit reluctant to kick up a fuss again as it seems likely it'll end up getting blamed on the tenants, who are probably just doing their best under the circs. (Well a couple are at least).

Thanks for the response. John Forde is who I've spoken to previously, and he's been really good but is also the person who told me he can't make the landlord create space to store bins at the front of the property.

The bin situation is generally ridiculous. 12 bins for next door is patently unfeasible, but living in what must be a very similar layout, so is 12 people in that much floor space. It's part of the reason I don't want to end up kicking the tenants in the teeth - they've already got a raw deal.

Jonny, I can't comment on what current local councillors are doing, but I promise you that recent local Cllr. Karen Alexander has been on this case.

Karen [ Karen.alexander.haringeylibdems@gmail.com ] involved me in the last fortnight and I am trying to help too. 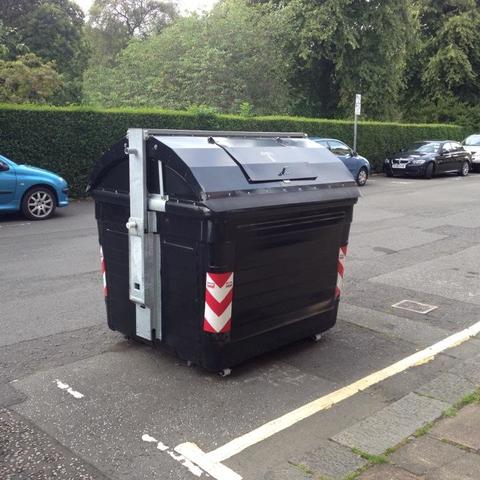 Well curiously enough that was me - photo above. There is an obvious issue with this approach - which is that they can attract dumping, but I'm beginning to wonder whether something like this, managed properly, would be better in some streets than endless wheelie bins (either in gardens or on the pavement)... But the key is the managed properly bit, and the being used properly bit as well of course.. And as we all know neither are easily attainable.

Yes yes yes.  This is my oft-posted solution to ALL our bin problems. One of these in the road every few yards, or a pair, green + black, replaces the bins in the front yards/gardens.   Emptied several times a week, but the total labour would be the same as going into each yard and picking up two or four or twelve bins weekly/fortnightly.  Brighton + Hove does it. Other countries do it. Personal bin provision is an historic accident, most other countries don't have it.

Let's get our front gardens back.  Grow flowers....

Yes, but what about elderly/disabled residents who may find it difficult to tote their rubbish and recycling to a street bin?

How does rubbish get into the house in the first place?  If a person needs help shopping, then the same help may be there to take out a rubbish. It's part of a home help's job. A carrier-bag full of rubbish - as it can be dumped in small amounts, don't think of big bin liners - will probably be within the carrying ability of most people who are not getting extra help.  The street bins are not far away, every few car spaces, in my fantasy scheme.

We have to do something more than add more + more bins. To me this is more likely to work with the lazy/hopeless/disorganised ones who don't use the bins properly already, at least all their rubbish would go into the one container and be emptied more often.  I write as one whose garden was covered in bluebottles this weekend, from the next-door-but-one incompetent neighbours whose bins were crawling with maggots this week.

Yep. Until it's easier to get rid of rubbish the right way than the wrong way, we will continue to see these problems. The absolute insanity of a council that tries to fix our problems with rubbish dumping and fly tipping by making it HARDER to get rid of waste legitimately never ceases to depress me :(

Pamish, I think you wildly overestimate the number of elderly/disabled people who have home helps and what those home helps have time to do. For some people, day to day living is a struggle and the things able-bodied  people do without thinking twice about are difficult for others less mobile.  I'm not saying your fantasy bin land wouldn't be a good thing, but it wouldn't work for everyone.

Anyway, I'm going off on a tangent I know. I hope V&M's problem gets sorted.