"Curly Alley" and other local names for Harringay places 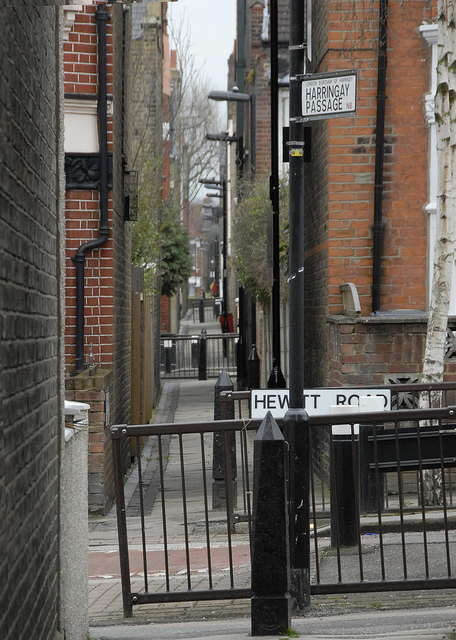 Last night I met up with a few neighbours to see if we can help jolt the Council into action on sorting out our bin fiasco. On the way home I learned from Hugo Read that his children have invented names for some  stretches of the Harringay Passage. So far we have:

(Can you guess which stretch is which?)
This story grabbed me on a couple of levels. First of all it made me think about how place names developed historically. They often did so, pretty much in the way that Hugo's children are naming parts of the Passage - say it as you see it. Hence 'Green Lanes' and the old name for St Ann's Road, 'Hangar Lane' (because it led to a series of big strips of land called 'Hangars').

I also began to wonder how common this personal naming of local places or features is in modern times. How many families or groups of friends have developed their own names for parts of our neighbourhood? Anyone willing to own up?

No names already? The book is open for you to suggest names. We could start with the passage.

I'm the organist at St. Paul's, Wightman Road and whenever there's something going on at the church and I have to explain where it is, I refer to it as the church with the Toblerone on top, and I've heard other people refer to it as the "Lego Church".  My husband calls it the "Space Cannon".

This isn't local, but it is another good example - where my parents live in Derby, there is a road called Snelsmoor Lane.  It's a very winding road and everyone locally calls it "Snakey Lane".

I can only think of less than complimentary names off the top of my head. Shopping Shitty and Fucketts Common for example. I will try to think of some nicer ones!

I used to live on the long and boring road, but that was in Hackney.

The city has lots of road names that where named after the kind of thing that went on there. Bread street, Skinners alley etc. I think some roads throughout England where prostitution was the main trade where called something particularly crass...But I'll let you google that!