Does Anyone Else Find Iron Smelting Slag in their Garden 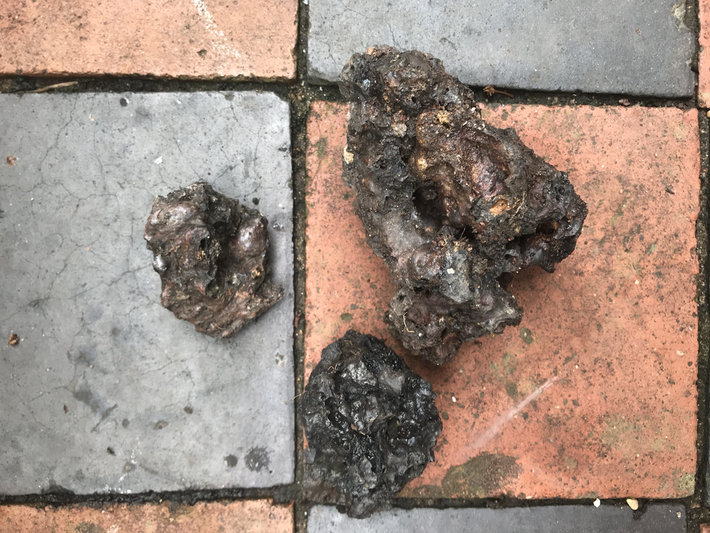 For years I've been finding in my garden lumpy bits of what looks to me like slag from smelting Iron. I'd been assuming that it was related to the occupation at Harringay House since my house is very close indeed to the site of the house. However, one of the estate plans published by the British Land Company shows no building of any sort just where my garden is.

It's not just one or two pieces. It's a lot. I used to just throw them away. But, fearing it will all soon be gone, I've started preserving the pieces I find now.

I've begun to wonder, even if there was a building associated with the estate just where my garden is, would they really have been smelting iron or any sort of metal (especially in full view of the southern aspect of the house - all the functional buildings seem to have been to the west). Ironworking, like fashioning horse shoes for sure, but smelting iron?  So I've begun to wonder if the smelting could have been from any earlier sort of occupation.

I'm trying not to let my fancies run away with me, but would be interested in finding a possible explanation. There's probably a simple and very mundane one, but I don't want to close off other possibilities.....just yet.

Does anyone else find anything similar? Does anyone have any ideas for an explanation?

No, but lots of coal clinker which was probably just tipped into the garden along with the ashes from the fireplace.

The small areas of solid floor in our house (hearths, outside loo etc) were levelled below the concrete with Victorian rubbish - ash, clinker, broken pottery, rubble, oyster shells and so on. I guess using waste to fill holes was probably common practice at the time, so your foundry waste (if that's what it is) may have come from elsewhere.

That dont look like coal.  Thats iron.......weight will tell you for sure

Thanks Maggie. That’s a useful link.

I missed the coal bit and read slag in your garden. Haringey is really going downhill I thought.

I agree with Tris. Based on my admittedly non-existent geology knowledge, it does look like clinker lumps from a coal fire.

I appreciate your thoughts H4e, but both its weight and consistency are very different from any clinker I’ve raked out of the fire. I’m quite confident that it’s not clinker.

Perhaps it's a by-product of the old town gas company formerly on Clarendon Road?

Could be since the stuff in Hugh's photo looks rough & porous, rather than glass-like, like flint.

Thanks Eugene. Did their processes produce slag? If so, do you know if it’s known to have found it’s way into other gardens.

If it is anything to do with waste from an old Gas Works contact your local Environmental Officer as many highly toxic chemicals seeped out and into the ground (including cyanide) in the process. Not joking!

When these houses were built masses of lead was used. if I were the builder for a terrace I'd be manufacturing the water pipes and lead welding in one location to minimise the fire risk, and using the pipes and flashing across the houses in the terrace. Although health and safety was crude in those days there's a long history of buildings burning from lead working. St Paul's Covent Garden being one example, completely destroyed the roof and interior hence the later interior design.