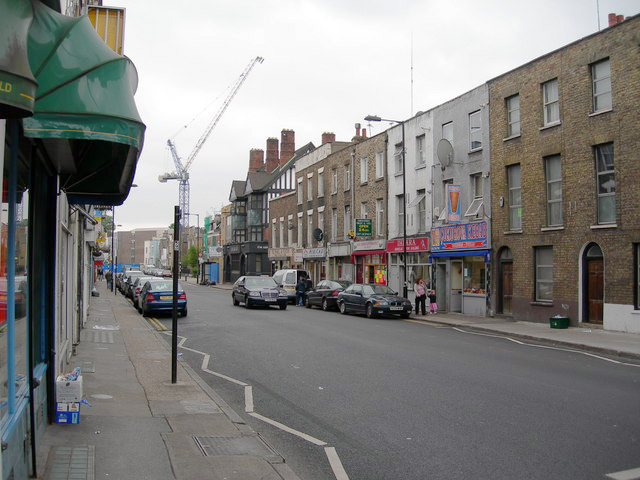 While Haringey Council faffs around with its almost universally unpopular scheme to divert traffic from Crouch End to Harringay, Hackney Council is getting on with the real work of creating a transport system fit for the future.

Hackney Council has announced that it wants to transform its section of Green Lanes to make it safer for cyclists and pedestrians. The proposals include adding a cycle track between Newington Green and Manor House, as well as narrowing roads to reduce traffic speed, "floating bus stops" and raised continuous pavements.

Hackney Transport chief Cllr Jon Burke said: "Green Lanes forms a key route for people travelling in the borough, but at the moment it's a hostile environment dominated by cars. We want to transform it for walking and cycling, so we can encourage more people to travel cheaply and sustainably, improving the quality of London's toxic air and reducing our reliance on polluting vehicles. I'd urge people to have their say on the proposals."

Subject to consultation, the scheme would be delivered in two phases. This consultation relates to the first phase of proposals between Petherton Road and Woodberry Grove.

Consultation on a second stage will take place later this year.

The Council says it is relying on funding bids for the project, so if it doesn't achieve full funding it would have to carry out the work in stages.

View the plans at consultation.hackney.gov.uk/streetscene/green-lanes.

You kind of mangled my comments to make your point. I only mentioned the Tour de France clothing to illustrate my point that it wasn't usually the common or garden cyclist but more the case the cycle club members who have a real problem with sharing the road. You may not agree with me but I've seen it many times, I've even seen a swarm of riders descend on a car that clumsily overtook, presumably totally frustrated at the lack of common sense and manners even though we all know "they have every right" to ride two and 3 abreast at a walking pace. If the reverse were applied and every motorist ensured no cyclist could overtake or undertake in queuing traffic by hugging the kerb and the white line alternately I'm sure cyclist would feel equally frustrated.

No one wants to punish anyone really, I think everyone using the road just wants everyone else to use it with a mutual amount of respect. Every car driver who drives too close to a cyclist chips away at that respect and every cyclist who does something equally disrespectful does the same.

How do we address this is the question?

Your cyclists being 'disrespectful' are slightly inconveniencing motorists.

The driver passing a cyclist too closely physically endagers them.

Where's the equality in that?

I cycle to work in jeans, shoes and a shirt (if it's cold, a jumper and gloves), it makes no difference to how motorists treat you. It's not about the clothing and there is no such thing as group responsibility - cyclists are not some secret cabal that behave the way they do because of an agreement. Ditto motorists.

I agree with you, stop building cycle paths in London. Enforce the 20mph speed limit with the same vigour that I see the City of London police enforcing the red lights for cyclists and price vehicle journeys according to the externalities that they force upon the citizens. There is already great cycling infrastructure in London, it's just monopolised by myopic car drivers.

Okay got it, maybe just set aside your thoughts about recreational or club cyclists, this is a conversation about segregated lanes, about enabling utility cycling.

To be clear though, the "reverse situation" you mooted is, in fact, what is so; people in cars impede my progress on a bike every day. Hundreds of them, in every direction, clogging up the roads. It can sometimes be impossible to get past, there are so many.

As for the idea of respect and punishment, I want to see drivers punished more often. They are on the road only by licence, where pedestrians and people on bikes have a right to use the space, and yet are consistently reminded that they are second class citizens, subject to a careless lethal entitlement enabled by near non-existent enforcement. i don't know what to say about respect; it won't keep me safe.

Here are some facts, as my final word;

There are 14 hit and runs a day in London. Just London, every day.

DfT and TfL tell us that around 80% of drivers in 20mph zones are breaking that limit.

5 people die every day after being driven into; their deaths go unnoticed by newspapers.  It's estimated that motor vehicles are involved in 99.4% of collisions in which a pedestrian dies, and yet here is today's headline about a person killed by someone speeding, on a probably illegal e-bike;

Note the language; "Cyclist mowed down and killed pedestrian". Note also the language used when a car kills a person; we will be told "the car lost control" "the car was speeding" "the car collided with the pedestrian". There never seems to be anyone driving the car, the truck, whatever.

Speaking of pedestrians, 6 a month are killed by cars on the pavement. ON THE PAVEMENT.

“I doubt I am not alone when I say I try to drive as respectfully around cyclists, but it only takes a few bad cyclists to spoil the mutual goodwill. Riding two abreast whilst adorned in Tour de France style clothing having a chat because they can is infuriating and just bad manners“

Driving around on your own in a tin can belching pollutants and CO2 several times bigger than yourself taking up huge swathes of the width of the road which is usually already half taken up with other parked vehicles just because you can is also to my mind exceptionally irritating and bad manners.

Some cyclists are bloody awful but it’s an undeniable fact that if I, as a pedestrian, get hit by one I’m going to come out of the situation a lot better than if I get hit by a car.

Almost ALL motorists have a sense of entitlement to the roads which far outweigh anything given to them in law. For instance - turning vehicles give way to pedestrians is very rarely obeyed, not even by the police.

What should a motorist do when it encounters a pedestrian in the road?

b. Clutch in and rev the motor.

c. Window down and yell an obscenity.

d. Wait patiently (up to 7 minutes) for them to clear the road.

According to the law it's 'd'.

Wow! You certainly have problems on the ladder!  Yes the main road from Manor House northwards is much narrower than the main road from Manor House southwards.  Yes Haringey have issues with Islington and Hackney and guess which three boroughs meet in the Finsbury Park area?  The solution is one trialled in the very early days of public transport.  Every vehicle on the road, defined as any mechanical contrivance for the conveyance of persons, whether 4 wheels, 8 wheels, two wheels (yes you cyclists as well) and unicyclists too (my son is one) shall have a person walking in front of them with a red flag, thus ensuring perfect safety on every road and jobs for all.