If We All Picked up One Piece of Litter a Day..... 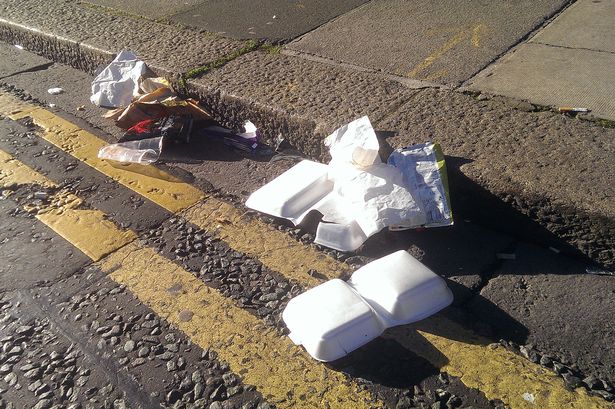 What can we do about litter? It spoils our streets and countryside and ends up being washed out to sea, polluting our oceans. It frustrates and saddens many of us, and no one seems to know what to do about it. As soon as it is cleared up it reappears in a never-ending cycle. So here’s an idea: how about launching a positive-spirited national network to link together people who undertake to pick up just one piece of litter every time they go out.

So went a letter published in The Guardian last month.

New research by Keep Britain Tidy has found that the presence of large, brightly-coloured items of litter – crisp packets, bottles, chicken boxes and sandwich boxes – act as a ‘beacon’, giving others permission to drop their rubbish and that keeping areas free from these ‘beacons of litter’ reduces overall littering.

In an experiment in two areas, one of which was Stoke Newington, Keep Britain Tidy found that by removing these 'beacons' littering was cut by 50% (see attached journal article for more). This suggest that we can all do our bit and make an impact!

Happy-clappy nonsense or a good idea in the making?

I've been doing this outside my house and next doors and across the road.  My thinking is that if I can keep a small patch of our road tidy, it will hopefully stop others doing it.  The above explanation certainly makes sense to me, and at the very least I can step outside my door and not see a mess that only gets cleared once a fortnight.  I'm also now weeding the pavements.  Really shocked to see how easily weeds take root in the cracks if the roads aren't swept, and it's noticeable how shabby state of pavements in Haringay this summer.  Also, I was watching a news item on the bin strike in Birmingham, and their pavements were also green with weed.

I used to do this outside where I live, then the street sweeping regime improved - and now it's back to how it was a couple of decades ago so litter picking it is once again. Also have weeds in the street gutters, including foot high ash saplings - that's a first.

Re Birmingham's rubbish, in the Winter of Discontent our Endymion Rd flat overlooked Finsbury Park - the internal road was where the uncollected rubbish was stored. For months. What a view. What a reminder of how easily the trappings of society can begin to unravel.

Yes I've noticed the weeds - I'm in two minds as I hate the way they randomly spray weedkiller in the street, but it's beginning to look pretty down-at-heel.

As for *one* piece of litter per day, I pick up several, usually to stop them from drifting into my front garden (or because they already have).

Killing the weeds means spraying with Glyphosate (or pulling up by hand, beyond the budget).   What to choose?

Permalink Reply by Nick G-T on August 15, 2017 at 10:36
I've been following up the issue of increased weeds and poor maintenance over several months. The spraying was undertaken quite late in spring but it seemed to be one sided; along fence lines rather than the gutters. After further pressure and including one of our more active councillors, two men from Veolia were out today with scrapers pulling up the weeds. They were doing a pretty good job too. I've asked for all roads in the Harringay ward to get the same attention, so hopefully all streets will see an improvement.

Permalink Reply by Mavic Starfish on August 15, 2017 at 12:30
Hi Nick
Do you have a contact email, I doubt if they will bother slumming it in West Green, even though I pay the same council tax fees, so I'd like to follow up. We have a veritable jungle springing up on Langham Rd

Permalink Reply by Emma on August 11, 2017 at 7:04
I've noticed a definite upsurge in the amount of litter on Green Lanes and surrounding streets in the past year or two. So sad. I definitely pick up litter when I'm out and about with exactly your philosophy Hugh. I do it with my kids in the hope that the next generation will find littering unacceptable. Plus I hate endlessly moaning about something and not doing anything about it, which is easy. But Finsbury Park in the summer has just become one big litter bin which is tragic. Especially after living here nearly 15 years and witnessing all the effort that's gone into regenerating the park. (That's my moan!) I remember littering being a huge problem that was endlessly tackled with Keep Britain Tidy campaigns in the 70s so it's really sad we seem to be no further on in 2017. Have the council cut the number of times our streets are cleaned as I understand they have? It certainly feels that way.

Really great article and great to know there are measures in place to address this issue. I was not aware of this. I'm certainly going to be more proactive on keeping outside my house and neighbours litter free on the street and regularly picking up rubbish. I've been in Harringay four years now and was genuinely shocked and disgusted by the levels of littler in the area compared to other areas of London I have lived. Great to know there is a Keep Britain tidy group and education at schools. I remember the Be a Tidy Kiwi campaign from my early New Zealand days and it still resonates today so it must have worked

The street sweepers in West Green Road (Harringay end) are pretty good and patrol every morning and quite possibly at other times of the day as well. They do an excellent job. The rubbish trucks attend twice a day which is one of the great benefits of living above a shop (another of course being the ease of buying a pint of milk).

But they can't be here all the time. I pick up litter in the street regularly and in particular on Green Gate Common and sometimes on Duckett's Common and Green Lanes as well. I've become pretty well known and have been congratulated on my efforts several times, once while not even on duty but in a shop. All comments have been extremely positive.

Green Gate Common has three rubbish receptacles yet still some people carelessly, even wilfully, drop litter there. I feel there needs to be education in the schools in an effort to make the practice unacceptable to the next generation. And in the mean time stiff penalties, probably financial, for present offenders. And for those concerned about the effect of that on offenders on benefits perhaps instead of a fine no money for a week or a fortnight, not enough to cause lasting damage but something to make them think. As for detection we have CCTV which has many benefits despite the views of some soi-disant libertarians.

In the mean time Haringey could do rather more. I once enlightened them on my activities and suggested only half in jest that they should give me council tax reductions. They in return treated that derisively and totally failed to comment on the other part of my suggestion that in return they could run a feature in various media on how one resident was helping his borough and how he was being helped in return. And again CCTV could identify my activities to the Council's satisfaction.

Haringey Council seems to have lost heart, and there's such a lack of original thinking in how it runs things. A bit of imagination is needed and real communication with us as residents is needed. In the mean time I've started receiving some brief complacent online official newsletter from the Council which is a travesty compared to these lively boards.

As it happens I'll retract my last paragraph above. After receiving today's Haringey bulletin I've decided it was maybe just lack of material for the first couple of runs. Today wasn't bad. But the penultimate para also involving Haringey stands.

Surprised/pleased to see a Veolia person using a hoe on weeds between paving slabs today. St Ann's Rd, near the pedestrian crossing by Warwick Gardens. Perhaps related to the 'tactile' paving.