After about six months of trying to find the right people at Thames Water and the Council, I finally found the people at the two organisations that are responsible for this.  While some of the details are yet to be worked out, the date is set for Saturday morning 18 April.  The last time we did this about four years ago and organised by Michael Anderson.  The section that I helped with was from the gate at Wightman Road to Hornsey station.  It only took 12 of us less than an hour and a half.  So, it really doesn't take very long.  There is one section on Green Lanes near Hermitage Road and others up to Myddelton Road.  I have yet to walk the entire route.  Thames Water will provide equipment like bags, gloves and litter pickers. They will also see who can help to remove the rubbish bags on the day too.  The Council will help publicised the clean up.

I'm putting this initial message out there to see how many people I can get on board.  I'm just a resident.  I'm not affiliated with the Council or any other organisation.  I do have a vested interest as I live on Wightman Road and the canal is behind me.  That's why I want to be involved and why I pursued this with the Council and Thames Water.  It would be great to get a team leader of sorts for each section.

The area that we want to do is on Map 5, page 9.  It's only the section from Seven Sisters Road to around Myddelton Road.

If you can spare a couple of hours that day, that would be great. When I get more details, I will post them here.

If you want to get involved email me at jamescowling1963@yahoo.co.uk.

Thanks for your help in this.

I hope people use it to visit open parts

This is such a good idea! Thanks for organising this. I should be able to come!

Please watch for updates on HOL.

I may not be here that day but happy to help in future.

I have taken to walking with an old carrier bag to collect recyclables that I see on my travels. I walked that way with my son a week ago and picked a full bag up before I had got to the bridge from Wightman. Same again on the way back. Bottles and bear cans. It’s a shame really.

Oh.  And the thing I cannot ever get my head around. who takes a dog for a walk, picks up any poo, bags it and then leaves it? I really don’t get this at all... plenty of poo bags, which I reckon is what I really object to.

Thanks for this.  Understand that you might not be here on the day.  If you are, I will update closer to the time.

Well done on contacting Thames and working with them on this. Although sometimes it needs a little pressure, these companies will help. I've had recent experience with both Thames and Network Rail.

With a bit of gentle pressure, Thames Water have actually been pretty good in helping to maintain the stretch of the New River between Hampden and Wightman Roads.*

A good deal of the litter along that stretch used to be from street drinkers who would perch on the low part of the wall towards the Hampden Road end. This meant lots of bottles and cans. It seemed to be the habit of the drinkers to place the empty cans on the ends of branches. (See my Beer Can Trees post.)

From time to time I'd take a few carrier bags with me and pick up the cans and bottles as I walked to Crouch End. On one occasion I even picked up an unused can of white truffles!

All these cans and bottles seemed to be centred on that stretch of low wall. It made a great drinking perch. All the drinking detritus that wasn't scattered along the path was stuffed through the aluminium fence along the railway boundary (Set about a foot back from the wall).

The sensible thing to me seemed to be to design the problem out. So I started reaching out to suggest that fencing was put up along the wall to take it out of service as a perch. I tried the Council, but they weren't interested. They mistakenly said the land was the responsibility of the Environment Agency.

So, towards the end of 2018, I contacted Thames Water. After some to-ing and fro-ing, they eventually put up some netting on the Network Rail fencing. It was good that they responded but this wasn't really the 'design-out' fix I'd been hoping for. It might slow the progress of cans through the fence but it didn't remove the problem. 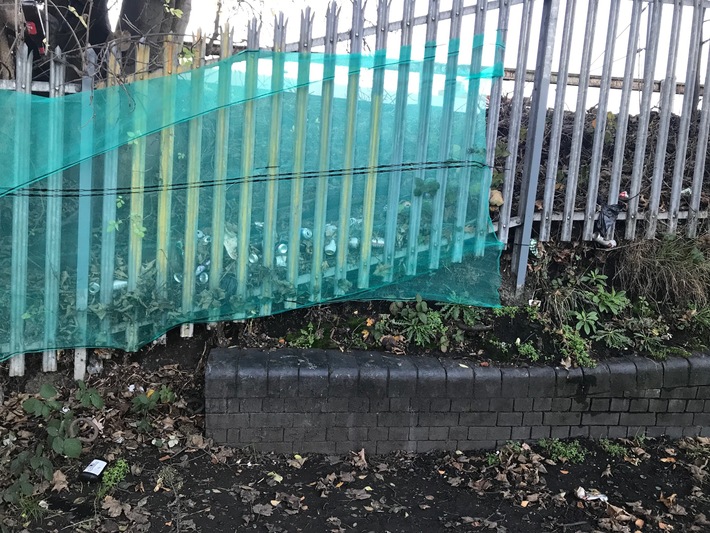 I pursued Thames Water a few more times in an effort the get a better fix. But, to be honest, the issue didn't occupy a whole lot of my mind-space. Then towards the end of last year, I was walking along the path and I noticed that a new fence had arrived out of the blue! It seems to have done the trick. So, whilst the New Cut isn't litter-free these days, it's a lot better than it used to be and I haven't seen any beer can trees in a while. Fingers crossed. 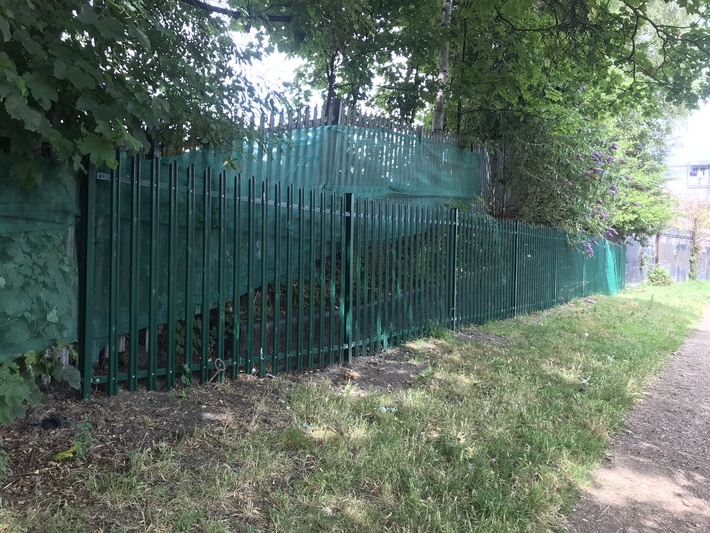 Thames have also been quite reactive to a few other building / construction tips at either end of the path. So, overall, three of four stars from me.

One thing they can't help with is the graffiti that occasionally appears on the wall a bit further along. I took the time to report one particularly bad incident at the beginning of last year. This time I started with Thames Water. But I was quickly referred on the Network Rail. 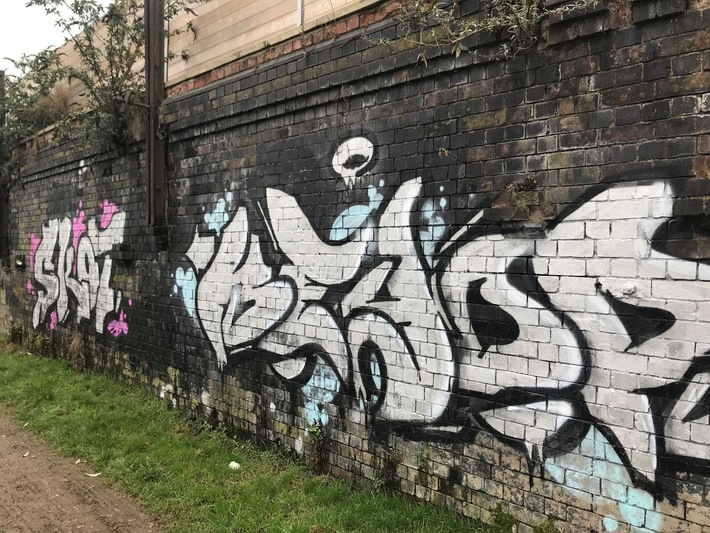 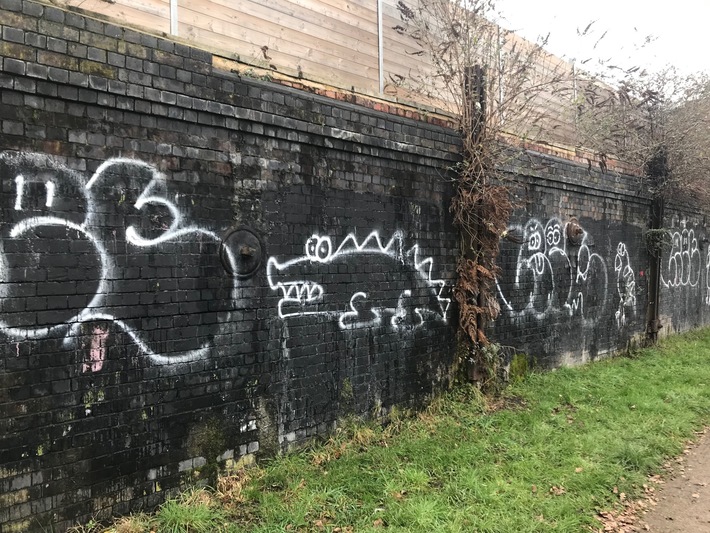 I contacted Network Rail via their national helpline and I'm pleased to say that the graffiti was removed within three months and I was even notified of the work being completed!

If anyone wants to contact either of these agencies to attend to any similar issues, below are the contacts I used:

For the last few years there have been sporadic path community clear-ups locally on the New River Path. I think the organisers are Cleanup UK and Thames 21. Michael was helping one of these back in 2016. (See the new river path tag I've added under your post for more). So, if you're still looking for help organising, those two organisations may be able to offer a different sort of help to that offered by Thames Water and the Concil.

Good luck with April 18. I will try and come and join you.

*I learned this week that the stretch of the New River between Hampden Road and Wightman Road was named as the New Cut at the end of the nineteenth century. This came about when a new channel was cut for this stretch to move it a little to the east when the railway line was widened.

Good stuff, Hugh! I’ll take those truffles if you don’t want them.

A few cans or a great big green metal fence.  Not sure which is the worse...  A bit of broken glass would have done the trick,

Great work, James. Count me in.

Thank you for this.  Appreciate it.

I have been in contact with Sarah from the Beautiful Boroughs Project who is willing to help organise the day.

Thames Water is going to provide 30 pickers, gloves and bags. Sarah can help with some gear too.

There are four areas that we'd like to cover that day. They are:

If you are interested, please let me know. If you could tell me what section you'd like to help out with that would be great too. My email address is jamescowling1963@yahoo.co.uk.

Sarah will be making some leaflets and posters too. I will get back to you with more information closer to the day.

Well done, James. Beautiful Boroughs is a CleanUp UK project, right? Is that the same folks who helped with previous clean-ups that I linked to above?

Have you had a decent response for volunteers?  The Bowes and Bounds and AP Neighbours forums might be good fishing grounds for bodies for the northern stretch.

PS. You can put me down for the Wightman-Hampden stretch.