I found a False Widow spider in the garden yesterday for the first time, instantly recognisable from the markings on its back. I have probably been taken in by some of the bad press in recent years but gather they are no more harmful than a bee/wasp sting (so I don't plan on getting too up close and friendly, and with a toddler I'm happy they keep their distance...)

Are these commonly found in our Harringay gardens these days?

And if anyone is really worried about them in their house.
Then just make sure you have some Daddy Long Legs around.  Cos they kill False Widows with ease.

Yeah - going to leave all my daddy long legs now! Spotted a doozie of a (I think) falsw widow yesterday!

As a pest controller I come across these spiders (steatoda nobilis) all the time and most commonly in rodent monitoring boxes. Over the last few years these have had a really bad press and loads of media hype. Most spiders in the UK have a venomous bite but this is the only one that can mildly effect humans. I have handled these on numerous occasions without any problems whatsoever.

They were actually first discovered in the UK way back in the 1870's near the south coast. The tiny spiderlings are carried on the wind and are now quite widespread across the southern parts of the UK.

This relatively slow moving species prefers dark secluded areas like plumbing box sections etc and rarely strays far from is protective habitat. Its hardly likely to be seen wandering around the house so stories of it biting people in bed are highly skeptical.

If they were that dangerous I think we would have heard a lot more about them in much earlier times?

Panic over me thinks!

Got one at the top of a small window.  So took a photo of it.  Its just a little compact camera. I put it on the macro setting and used the flash. The photo wasnt any good.  But then I starting thinking.  using a flash 4 inches away from a spider who has a number of eyes.  Cant be very good for the fellow

Anyway I went back the next night and took another one (see below).  I used the flash (which was needed).  I went to take a second photo from a different angle.  And the little sod went for me (or the camera)  It was a fast but erratic run.

I pulled back i marvel.

I went back a few hours later, to see it, expanding its webs, in the direction where my camera had been.But in the days before it was content with its smaller web.This web expansion had nothing to do with catching food.  But more to do with my camera and its, clearly, dreaded, flash.

A week later, its still in the same spot, happy as larry.  The good thing, as stated above, is these guys, dont really travel about.  Once they got a little web in place, they will most likely be there for months. 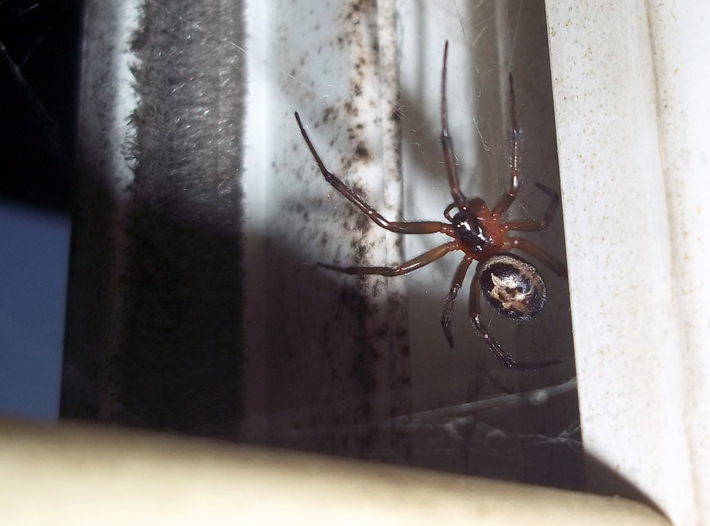