Yesterday, I was sent the weekly planning applications list by Haringey Council. One entry surprised me. An application has been retrospectively made to change the use of 45 Grand Parade (part of the Antepliler empire) from retail to restaurant use (A1 to A3).

So, I looked back at the history of the building and found that prior to it becoming part of Antepliler back in about 2013, it was trading as the Green Lanes Social Club. I'm guessing that both Ian and Antepliler assumed that it had therefore already been A3 and that consequently no change of use was required. So, that explained that to my satisfaction. My interest was piqued, however, when I noticed that Haringey's online planning records suggest that from 1956, the premises was a Blacksmith's shop. (More on that later!)

By this point the history bug had bitten......I was already hooked. So, I looked beyond the planning records and found the previous tenants and got rather carried away digging up their story.

I found that prior to it being "a blacksmith's", 45 Grand Parade had been a tailor's shop. I had to learn more!  And, as seems so often to be the case, following the history of that one shop unearthed an unexceptional but revealing little tale that opens another chink of light on our Harringay forebears.

The shop was run a a tailor's by the Sanig family. The Sanigs both lived and traded in Harringay for almost half a century. So, their story is also Harringay's

Without burning too much midnight oil, the earliest mention I found of the family was back in the middle of the second half of the nineteenth century. We meet Simon and Annie (Hannah) Sanig. Both were born into the Jewish community in Russia (Annie in 1867 and Simon in 1870). By 1894 the first of their children is recorded as having been born in Whitechapel. At a wild guess, I'm assuming that either the wave of Russian Pogroms between 1881 and 1884 or the expulsions from Moscow in 1890 to 1891 would have been the cause of their departure.

A significant number of Jewish immigrants who arrived in the UK during that period made for the East End of London. So, it was no surprise to be picking up the Sanig's trail in Whitechapel. 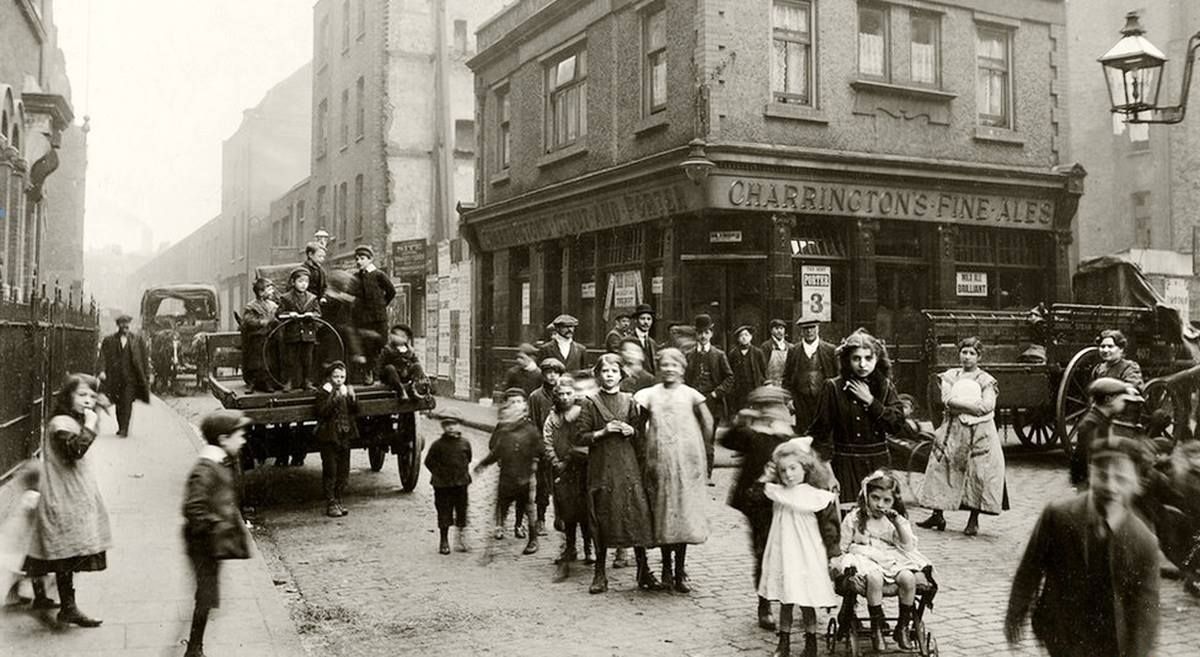 By 1901 the couple had added to their family sons Myer, Maurice, Stanley and Joseph. At around this time, they moved to 64 Commercial Road in Stepney and by the time of the 1911 census they had moved again, to 5 Eagle Place just off the Mile End Road. The family had also grown by a further four children. 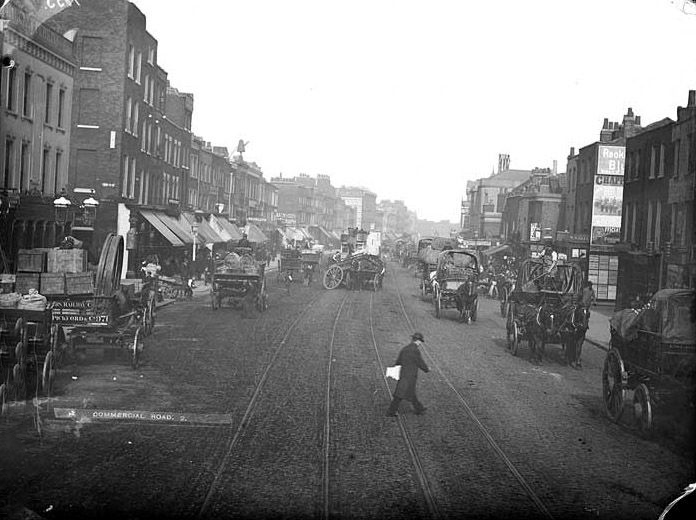 The exact date of the move to Harringay is uncertain. The first trace I found was the army record of third son, Stanley, in 1919. By that time, he was recorded as living at 34 Lothair Road.  It may be that this roughly marks the arrival of the whole family in Harringay, or perhaps Stanley acted as the vanguard.

The first record I could find of the family trading at 45 Grand Parade was in 1920, when Sidney Sanig is recorded as trading from that address as a tailor. The picture below dates from about 5 years before that. Number 45 is already trading as a "Repairing Tailor", an epithet also used by the Sanigs. It may be that they were already trading from the premises at the time of the photo or perhaps they later took on the tailor's business shown in the image. (Records from 1908 give the tenant names as Henry Lennox, Douglas Smith, Edgar Peter Lane, but I have not yet found out what business they were running). 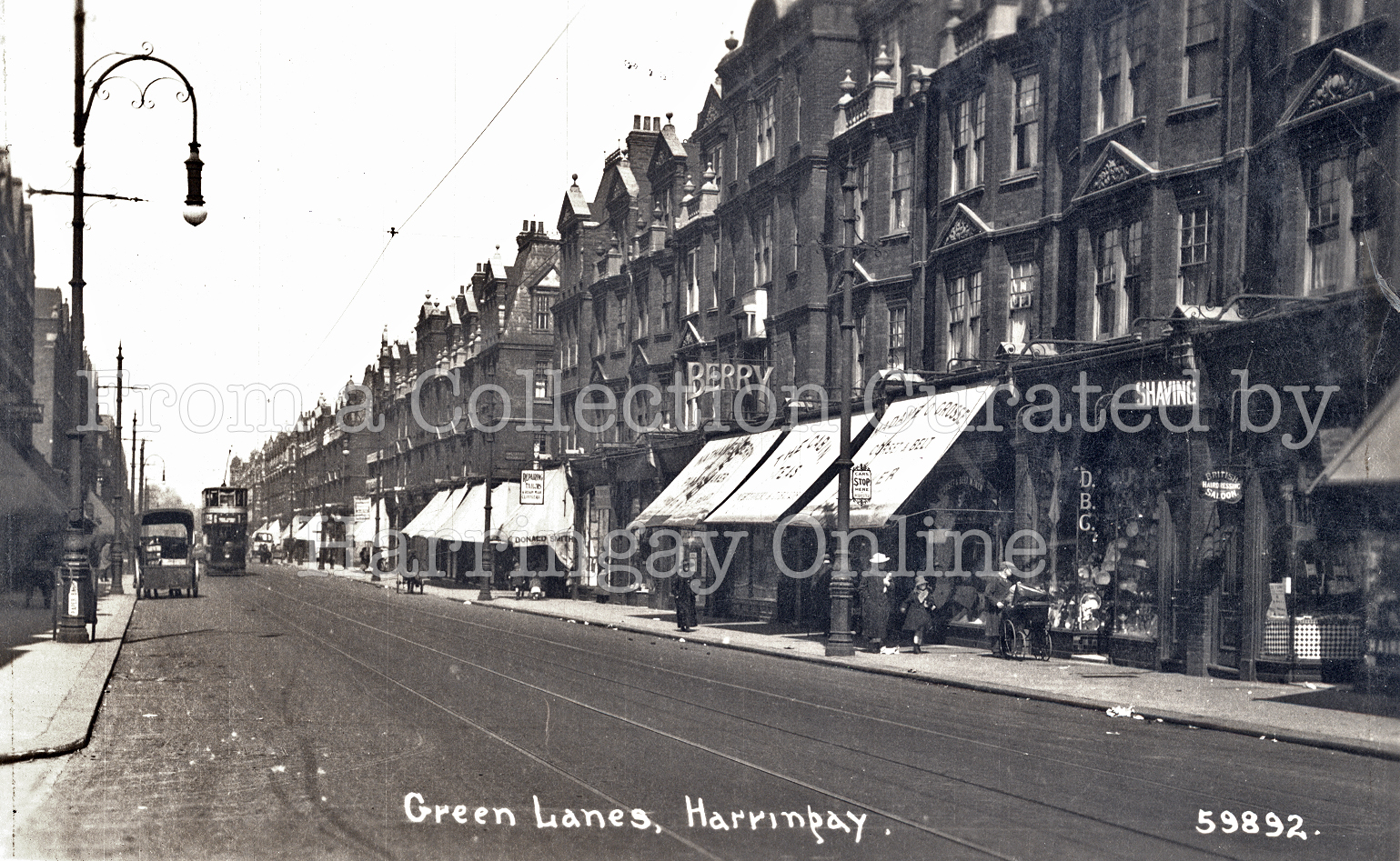 Green Lanes circa 1915. 45 Grand Parade is a few shops beyond Berry's bearing the sign "Repairing Tailor" Also,  by 1920 oldest son Meyer (also called Mart and Marte) was trading at 52A Grand Parade as a button manufacturer. Prior to Meyer's arrival, the shop had been trading as a hairdresser. It just squeezes in to the far right of the main picture above (Look for the little oval sign in the space between the 'd' and the 'b' of the watermark). I can find no records of the button business after that date, but I believe that it was later moved into number 45. Meyer emigrated to the USA in about 1930. He settled in New Jersey, where he died in 1978.

By 1925, the premises at 45 was trading as Maurice and Sidney Sanig Repairing Tailor. Then from 1926 up to 1940, the business was recorded as being run by Maurice Sanig. From 1941 till 1965, anohter brother Phillip took over the business.

Apparently, in 1924, Sidney struck out and set himself up as a tailor at 281 Upper Street. By 1930, he was trading as Sidney Sanig & Co at 253 Upper Street and living in Finchley. There are records of two companies in Manchester which were dissolved shortly after 1980. One was Sydney Sanig Ltd, the other Sanig & Stanley Ltd. I have been unable to confirm if they were run by the Sidney from the Harringay Sanigs. 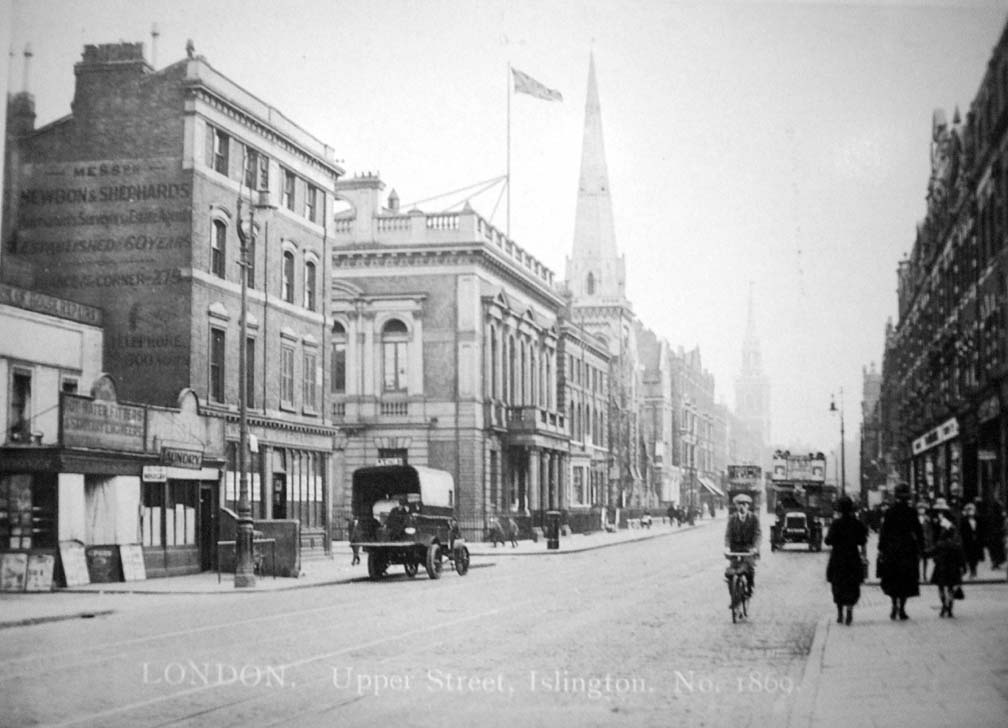 Maurice also developed a business beyond Harringay, By 1939 at the latest, he had set up a second shop shop at 56 Shaftesbury Avenue, just around the corner from the junction with Rupert Street. He is shown trading there till at least 1956. It may well have been that he bought a going concern. Newspapers show a Mr and Mrs Rose operating a tailor shop from the premises from 1892 to at least 1901. It may have remained as a tailor till Maurice took it on.

Simon Sanig is first recorded living in Harringay in 1923 when he is at 24 Warham Road with wife Annie and fourth son, Joseph. He is still living there at the time of his death in 1955.

Phillip seems hold the Sanig record for the highest number of Harringay addresses. In 1928, he was registered as living at both 26 Umfreville Road, with brother Maurice, and also at 24 Warham Road, with his parents. In 1930, he's at 13 Warham Road and three years later at 41 Duckett Road. From 1934 to 1937, together with his wife Mary, he's registered at 72 Allison Road.  By 1939, he's moved back in with his parents at 24 Warham. By 1954 at the latest he seems to have moved out to Enfield.

One personal note I found on the web suggests that Maurice emigrated to the USA in 1947. Given his continuing presence in the records at 36 Pemberton Road, this may be incorrect, or it may be that he only stayed in the US for a short time. There are certainly traces of him living for a short period in Connecticut, but I'm not clear on what basis he was staying there or for how long he stayed. In any event, he clearly returned to the UK sooner or later and lived on to the ripe old age of 95. He died in 1990 living in Edgware, Middlesex.

NB: I found no trace of that blacksmith. But the information on Haringey's "OLD" planning records doesn't quite add up, because we know that Phillip Sanig was trading as a tailor at 45 Grand Parade from 1941 to 1965. Since I can find no trace of a blacksmith ever having been in operation at that address, I'm going to make an assumption. To save my diving down another Sanig rabbit hole, I'm going to assume that the use of the term 'blacksmith' on the planning website refers to the button-making part of the Sanig operation.

Yes, Phillip Sanig did move to Enfield. I remember well in the late 1950's and 1960's a house in Willow Road had an exceedingly large, unattractive sign in the front garden advertising Sanig Tailoring.

Thanks for the personal memory, Sandra.

Thanks to @rosieposie750 for tweeting me this picture of an old hanger her parents had.. 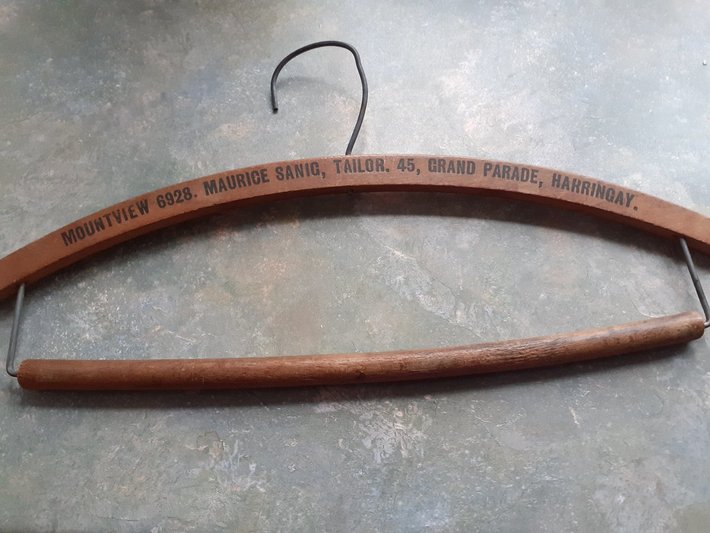 So interesting. We used to go shopping in Harringay Green Lanes when I was a child. I remember the sweet shop just along by the Salisbury and the egg shop across the road.

Thank you for the link Hugh, great memories.