A Turn of the Screw in Wood Green

One of the key members of Wood Green's Industrial sector during the first half of the Twentieth century was Davis & Timmins.

Founded in 1876 by Henry Timmins and French-born Emile Davis, the firm specialised in 'turned work of all descriptions'  including screws, bolts, nuts, studs, washers, terminals, and later, small component parts for electrical work.

It was originally based in Bowling Green Road in Clerkenwell. The 1881 census shows that in that year Davis employed just 2 men and 12 boys. However, growth for the firm after this point was apparently rapid. In 1882, Timmins left and the factory moved to Charles Street, near Farringdon Station.

In 1892, the  firm moved again, to premises at 34 York Road, King's Cross. Three years after the move the premises were enlarged.

In 1899, the company wanted to expand still further and needed to acquire additional factory space for the purpose. To enable this growth, the company was publicly listed and soon after the premises in Wood Green were built.

By this point, the company's customers included several government departments, including the War Office leading engineering firms and some of the main railway companies, including the Great Northern Railway Company. 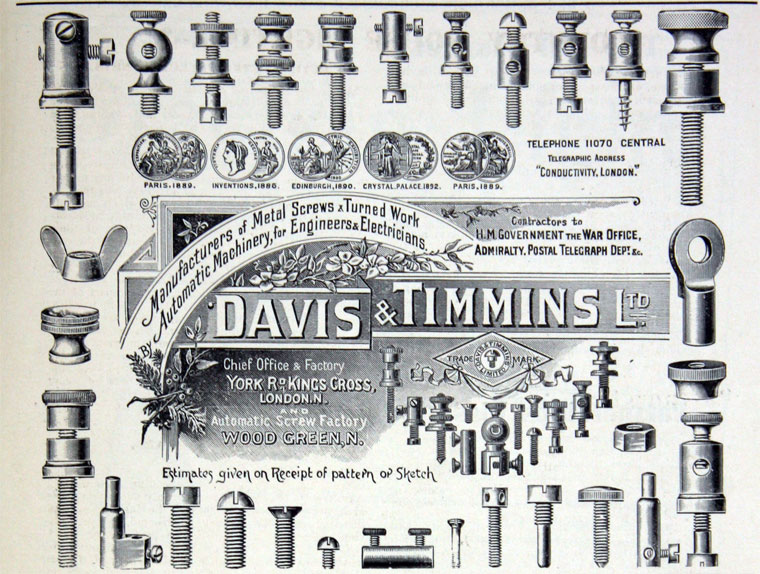 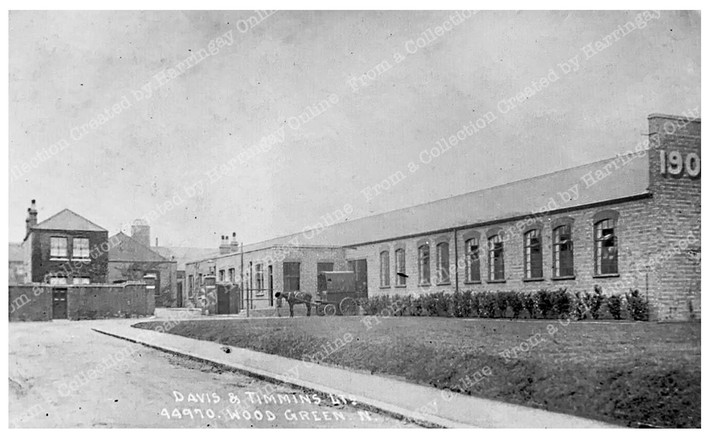 The factory was between Brook Road and Clarendon Road

An advertisement placed in that year, guggest that the factory at Wood Green had continued to grow. It claimed that “The works at Wood Green cover an area of several acres”.

Below is a staff photo taken in around 1930. 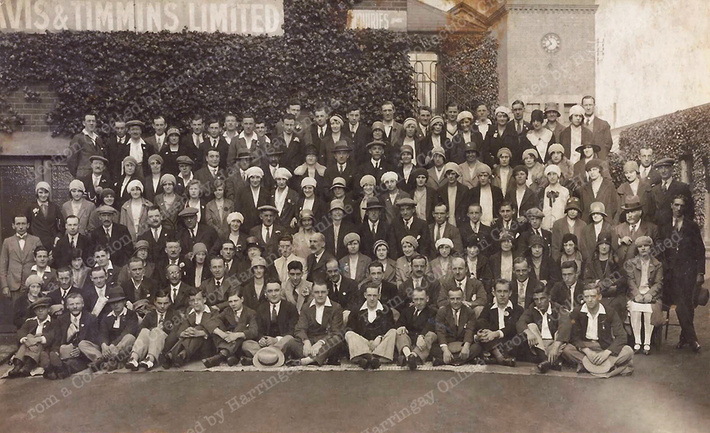 The factory remained at Wood Green until the mid-Sixties when it was taken over by Delta Metal.

In 1897, Emile Davis, George Davis and his French wife Charlotte had moved to Truro House (still standing at the junction of Green Lanes and Oakthorpe Road in Palmers Green). The Kelly's Directories list Charlotte as living there until her death in 1936, when she is succeeded by her daughter, Charlotte J. Davis. The younger Charlotte died, unmarried and childless, in 1995, at the age of 98, having lived for her whole life in Truro House 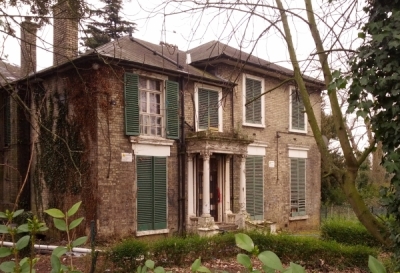 Good stuff Hugh, those gasometer holders in the photo* look like Kings Cross? The local Gasometer adjacent to Brook Road, built in 1929, looked like this: Thanks Eugene. The picture came from a Haringey Council sourced document which suggested it showed Wood Green. Thanks to your eagle eyes and intimate knowledge of your own backyard, I've now edited out that suggestion!

PS Did You see the post on the tobacco factory?

Also excellent stuff on the tobacco factory Hugh. They're apparently going to call the new development on the Gasometer site "Clarendon N8"

So it was shot pretty near Davis & Timmins Head Office and warehouse then!

I wonder where the Clarendon name came from?

Perhaps this little notice from Dec 7th 1901 deserves a space in the forthcoming "Clarendon N8" development: 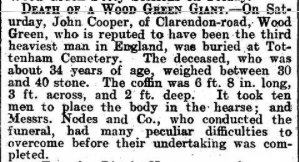 The clarity of the staff photo is wonderful.  So many old black and white photos are like that.  Knock the iPhone selfies into a cocked hat.  Most interesting. Thanks, Hugh!

After a Secondary Technical education at Enfield Technical School the only local apprenticeship available was at Davis and Timmins, which I attended very briefly being involved in cutting up, drilling and screwing component parts for  Colibri cigarette lighters.

I eventually had an apprenticeship at De Havilland Aircraft Co,  and completed a successful career in Quality Engineering.It was all far removed from my time at D & T.

Thanks, Ernest. Do any of the buildings pictured above look familiar?

Do not have memory of Wood Green factory building.

The one memory I still have is coming home reeking of the smell of the oil from the screwcutting machinery.

Now that's a bit of personal interest there Ernest. My older brother Brian left Downhills (Grammar ?) School on Philip Lane/West Green Road in 1956 and secured a job in Davis and Timmins machine shop.  He only lasted around 6 months due to bad reaction with cutting oils, apparently used and sprayed out in vast quantities.

He then took a job with a very small engineering shop at bottom of Hewitt Road just off Green Lanes opposite the old Coliseum cinema, Harringay. He thinks the name of this engineering outfit was Colibri !  (But it could be they only made components for Colibri ?) But coincidence you mentioned that name.

But on another point............I attended Enfield Technical College/School in early 70's but for life of me can't remember where it was located.  So wonder if it was same establishment, if so where might that have been ?

If you get time or inclination Ernest maybe you can throw some light on this ?