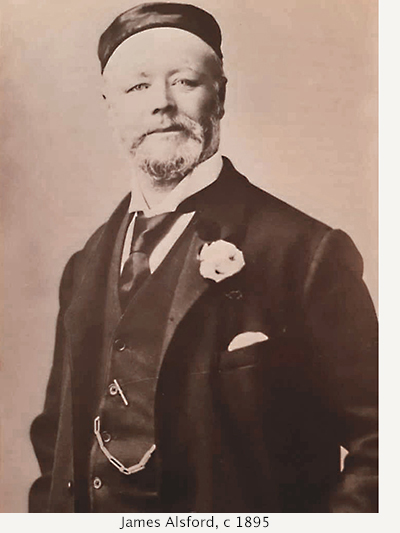 Born in Clerkenwell in 1841 James Alsford established what was one of Harringay’s first business and went on to occupy (and possibly build) what became the area’s oldest cinema building.

During his early working life, James worked as a plasterer and lath maker, constructing timber supports for interior walls.

At some point in the mid-nineteenth century he migrated to Canada. He returned to England in 1874, married his wife Harriet Bourne and used what little savings he had to start his own firewood business in Hornsey. James sawed the wood and Harriet split it into convenient sizes.

Whilst the exact location of his earliest business is not known, he rented the premises from the railway company. It is likely that it would have been close to Hornsey Station and given the location of his later premises, probably to the east of the railway line. This would make him the first business established in Harringay, behind only, the potteries where Sainsbury’s now is and the Queen’s Head pub.

Alsford saw that the London building boom just reaching Hornsey was where the real opportunities lay for him. So, before long, he moved on form supplying firewood and established himself as a timber merchant.

His move couldn’t have been better timed.  Evicted by the railway company, who needed their land for the expansion of the railway, James had to find new premises. With the first auction of land in Harringay having taken place on 30th May, 1881, Alsford  set up new premises in a single storey building on the banks on the New River, along what was soon to become Hampden Road. He soon had a ready-made clientele on hand. 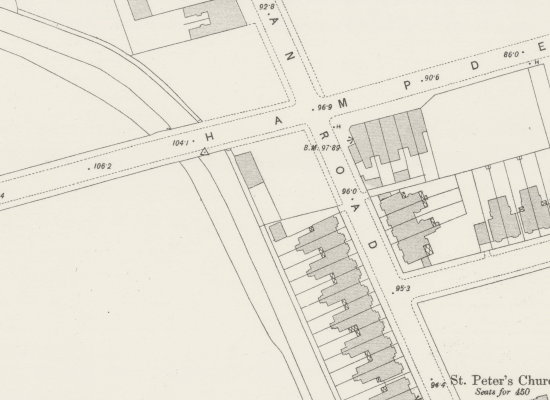 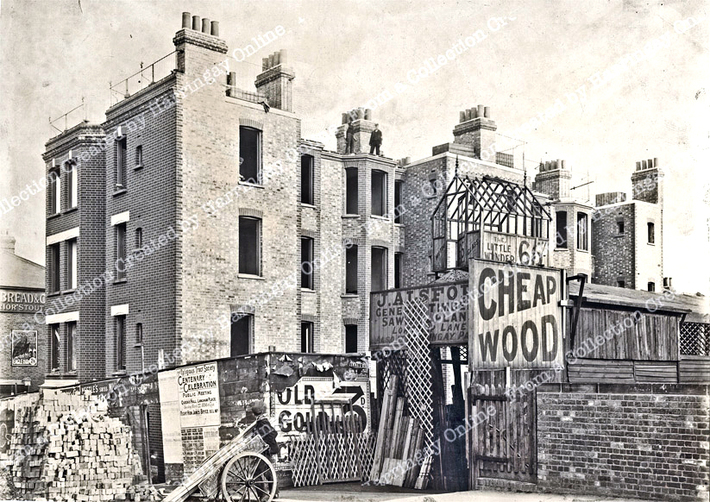 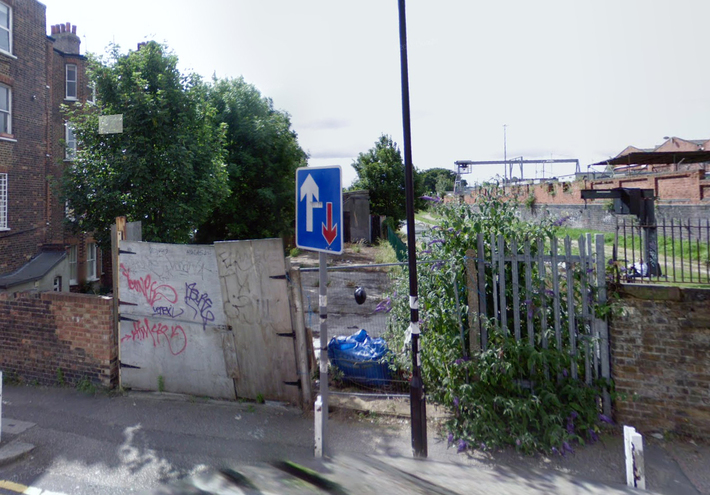 Image 4: The site of the premises, behind Station Mansions from Google Maps, 2008.
The two storey Seaton Place was built on the site in about 2013

By 1891 Alsford had established other yards on north London, including at Wood Green, Edmonton, Enfield and Leyton. The Wood Green Yard was on Lordship Lane near to the junction with Green Lanes (High Road). 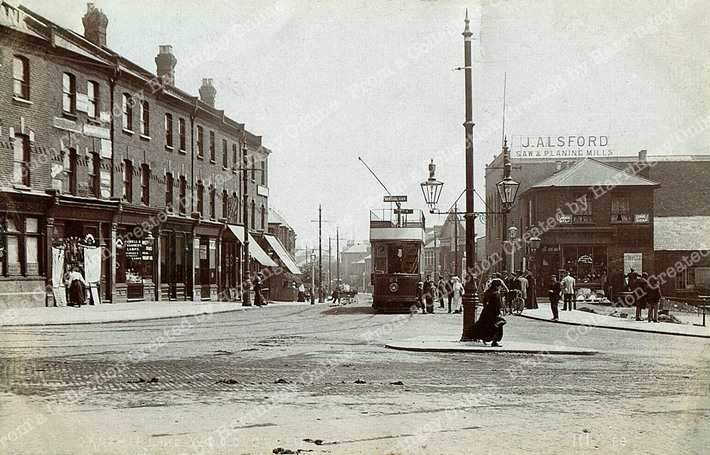 The 1891 census recorded him as living at 2 Noel Cottages Green Lanes, Wood Green. This was a terrace of six late Victorian terraces just to the south of Chesser's forge and very close to his new Wood Green premises. 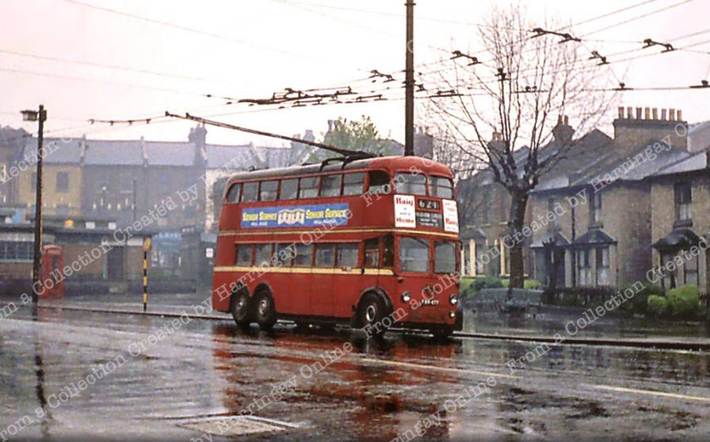 Image 6: 2 Noel Cottages is on the extreme right of the photo. On the extreme left is the old bus shelter and public
toilets that used to stand on Spouters corner. Beyond them is Lordship Lane. Photo taken c1960.

In 1895, Alsford purchased two plots of land on Green Lanes in Harringay and by the following year a second site had been set up at 605 - 607 Green Lanes. This part the first two thirds of the Medlock shop. By the end of the century, he was operating from the yard behind, and used the address 607A Green Lanes. (For fruther information about these backlands see The Story of the Effingham-Beresford Backlands. In 1909, aged, 67, James Alsford retired to settle in Park Avenue Palmers Green. The Leyton site was given to his son James and the others were sold.

The top part of the Wood Green Building was taken on by the the Wood Green Cinematograph Company to be used as a cinema. But, Alsford's business was apparently sold as going concern and traded as Denchfield timber merchants. They took on both the Green Lanes, Harringay and Wood Green premises. The Green Lanes business ran until 1922. The Lordship Lane one continued until 1965 at the same premises (although a renumbering in 1930 changed the address from 8 to 733 Lordship Lane). Image 9: The Cinematograph opened on the first floor of Alsford's old premises on January 1, 1910

Alsford died in November 1912. His son sold the Leyton premises and moved out to Twickenham. The firm still survives today.

Retiring to Palmer's Green.  Yes, I am sure many did that.  Like the title, Hugh!  Even when I was growing up it was that sort of place.

It used to be more expensive. Not any more - though the balance does appear swaying that way a bit again.

So interesting, thanks Hugh.

Thanks to Derek Reynolds for tipping me the wink on another piece of Alsford history. Although not local, I thought it worthy of note. 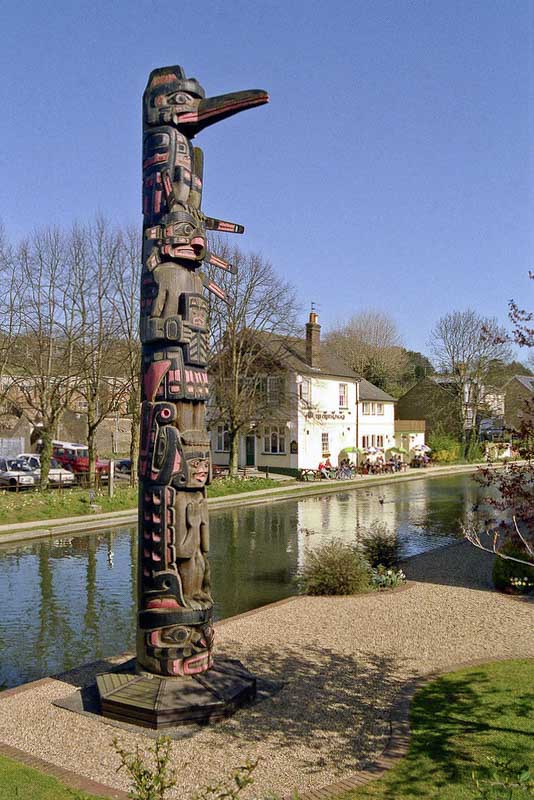 Kwakiutl totem pole found in Berkhamsted. Situated next to the canal is a genuine Canadian totem pole. It was given as a gift to John Alsford when he owned the timber yard that was originally on the site where it stands.

The carving is a fertility symbol and legend has it that women wishing to conceive should visit and make three wishes for the child they dream of!

Great pictures of my childhood playground - including a wet Spouters Corner! Had a friend who lived in one of the cottages on Spouters. Saturdays saw escapologists chained and padlocked into a trunk, and Sundays Sally Army band. I just missed the tram days, but went everywhere on the Trolleys. Born '47 in Redvers Rd.