The following text is from Abernethy, Simon T., The New Survey of London Life and Labour 1928 – 31, University of Cambridge, 2013. Beneath it is a copy of the map at the highest resolution I have. Click it, then click it again, to enlarge.

The New Survey of London Life and Labour was a social survey conducted within Greater London in the late 1920s and early 1930s. Relatively unknown compared to Charles Booth’s more famous survey of London some forty years before, the New Survey is perhaps the most detailed study of the lives of everyday Londoners in the inter-war period.

In 1930, the London School of Economics and Political Science published the first volume of The New Survey of London Life and Labour. In the following five years a total of nine volumes were produced, analysing various aspects of London, from the leisure activities of its inhabitants to its industries. The concept behind the New Survey is revealed by the subtitle of its first volume, Forty years of change. Forty years before another social survey took place in the Metropolis, Charles Booth’s Inquiry into the Life and Labour of the People in London. Booth’s survey was undertaken between 1886 and 1903 and remains perhaps the most famous social survey undertaken of the capital. Certainly, whilst a great number of people are aware of Booth’s survey, and perhaps most of all the coloured maps giving a description of poverty on a street by street basis, relatively few are aware of its more recent successor, the New Survey.

One of the key undertakings of the New Survey was a household survey, overseen by the noted statistician Arthur Lyon Bowley. Houses were selected on the basis of random sampling, a technique that Bowley had pioneered in the decades before. The household survey covered 38 London Boroughs and was undertaken by at least 181 different interviewers, many of whom were school attendance officers. Equipped with a survey card interviewers attempted, with varying degrees of success, to collect information on the household including rent, wages, hours of work, and birthplaces. The completed cards were then sent back to headquarters to be statistically analysed, but it is clear that such was the volume and depth of the information collected that it was beyond the means of the New Survey staff to fully examine the results. Furthermore, as the New Survey was primarily an investigation into poverty, it was decided that households considered to be ‘middle-class’ should be excluded from the analysis, even when the data card for the household had been filled.

At some stage the data cards for the London Borough of Tottenham (the cards which contained working-class households) were lost and have not been recovered. 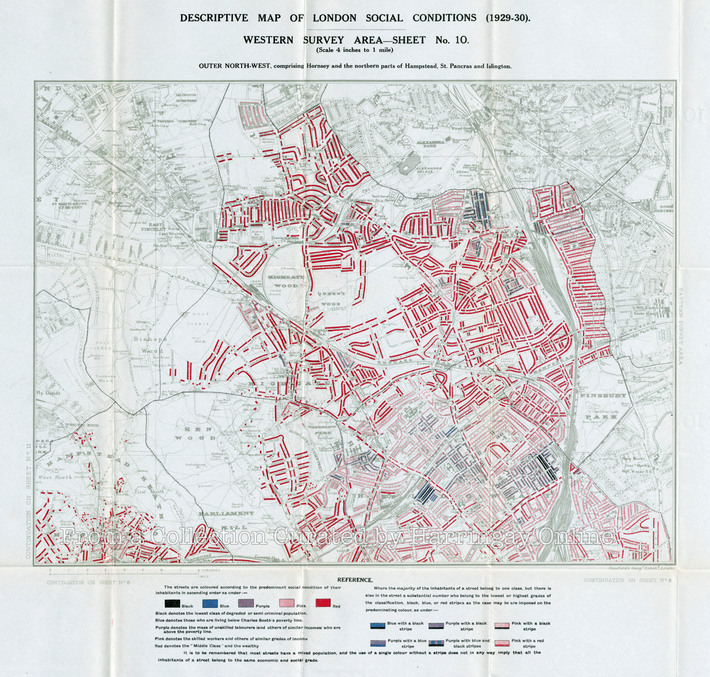 Fascinating, Hugh.  Might the red and pink in Harringay mean that many of the middle class still employed household servants in the 20s and 30s, or would these more likely be separate households?

Geraldine, I suppose it could be that, but my understanding is that it's more likely to be related to a social mix of households in the street. The map key has the following to say.

Where the majority of the inhabitants of a street belong to one class, but there is also in the street a substantial number belonging to the lowest to highest grades of the classification, black, blue or red stripes, as the case may be, are imposed on the predominating colour as under, e..g... pink with a red stripe.....

It is to be remembered that the most streets have a mixed population, and the use of a single colour without a stripe does not in any way imply that all the inhabitants of the street belong to the same economic and social grade.

Whenever I undertake research on Harringay that looks at residents through the first half of the last century, I'm always stuck by the change that seems to have taken place post-war. I think Harringay was very mixed from the get-go, with some houses being shared (but not physically split) from the earliest days. I have a strong impression that conditions did worsen here in the 20s and 30s. Photos of Green Lanes in the 30s and 40s do nothing to dispel that idea. Look at this example.

It's interesting to note that the last streets to be built up, these in the centre of the Ladder were apparently the most prosperous and least socially mixed.

Thanks, Hugh.  Yes, there must have been many adjustments to society post-World War 1 and with the depression.   Some that had previously enjoyed a comfortable living standard would have grown accustomed to reduced circumstances or perhaps even rented out their property.  Even in the 1940s when we moved to Harringay, we all seemed to live hand to mouth.  The biggest difference from today is that there were hardly any cars to be seen.  We used to roller skate downhill from Wightman to Green Lanes sometimes in the middle of the road.  Very interesting map.  Thank you for posting.

Never heard of this survey. Amazing. The estate where my family lived, I was born (in 1950s). And still live is so obvious as the the black area in the heart of Hornsey. Amazing map. Thanks Hugh