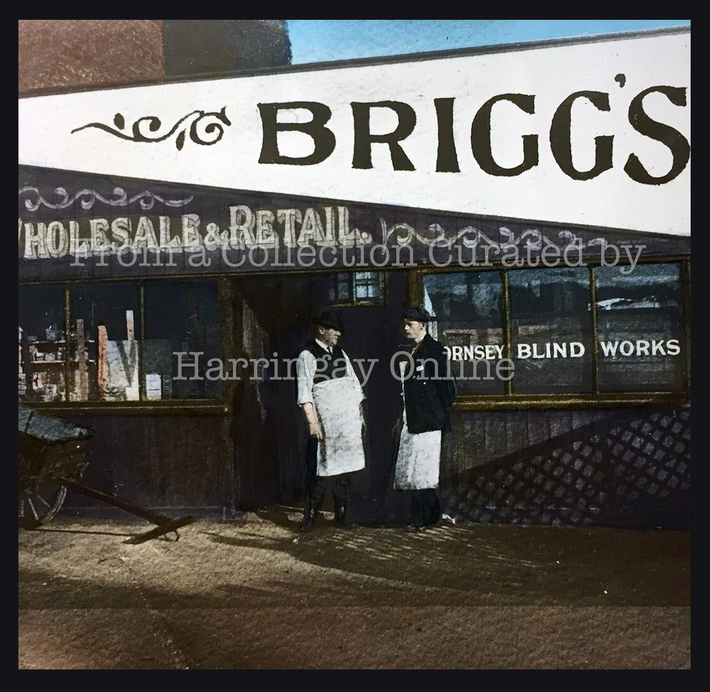 By 1906, the premises were occupied by the Falkland Manufacturing Company, Steam Rubber Works. By 1909 that had been replaced by Walton Bros, Tinsmiths and next door was the Caledonian Motor Carriage Company to whom I've previously introduced you.

Looking at old OS maps, it looks like that eastern strip of Falkland Road was given over to commercial premises from the very beginning.

From the above image, it looks like Briggs was based in a one-storey premises. The maps suggest that this set-up was changed in the 1930s. I don't know if the current two-storey buildings date from that time or from a later period.

Below is a snippet from the 1902 Kelly's Directory, showing a listing for Briggs and his commercial neighbours.

The main image is reproduced from a colourised magic lantern slide. The taller building on the left of the image would be the rear of the building fronting Green Lanes.

Misplaced apostrophe, even that far back

Quite a striking shop-front design for the period.

Interesting numbering - The current development of Falkland Road ends at 99 - it is short of houses like Frobisher because of the school.  Does this all pre-date the building of these houses then? I thought they were all around 1900-1910.

The development of the whole Ladder was pretty much complete by the mid/late 1890s. Not much at all was built in the 20th Century. For some reason Falkland Road seems to have been developed a little later than its immediate neighbours. Nonetheless, to the best of my knowledge, most of it was completed by 1897/98.