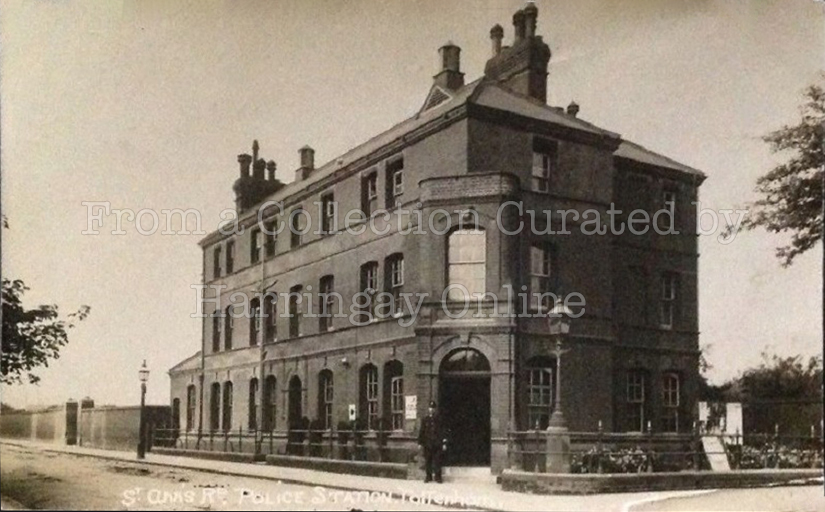 Great picture, thanks for putting it up here. It looks a bit lonesome around there... Hermitage Road is almost inexistant and there isn't much on the hospital site either.

The hospital was set up by the time this photo was taken. But at this stage it was all single storey wooden huts, put up in a hurry (and against strong local opposition) to deal with a scarlet fever outbreak in London.

There was a short terrace of early nineteenth century villas on St Ann's Road, just to the west of the police station. They were set back from the road so they might be hidden by the police station in this image. Around this time the houses were bought by the hospital. They were considered to be in too bad a state for use and so were demolished. So it's also possible that they had gone by the time this photo was taken.

There was also a terrace of newly built Victorian back-addition houses just to the south of the police station on Hermiatge. They were also bought by the hospital and were used for staff accommodation for a few years. However, they demolished before the First World War.

Hermitage Road itself used to be a private road and was something of a quagmire as development progressed during the late nineteenth. It was a problem for the hospital and for the developers who were building up the area and was a recurrent theme in local papers at the time. The road wasn't adopted by Tottenham Council and made up till later in the first decade of the Twentieth Century.

That looks much more daunting than I remember it.    Bunch of mates were playing in Woodlands/Chestnut Park after hours.    The parkies couldn't catch us so they called in police from across the road.   They set up a pincer type movement and chased us all to a high brick wall which we duly scaled only to be met by more police waiting on other side for us  (oh the good old days when Bobbies were plentiful).   I received a punch in the mouth for my efforts and marched back to the station, arm up my back, for a ticking off.   "We got your name son, so watch out !" said the sergeant.  I must've been 12 years old at the time.