The Sound of the Stonebridge Brook Still Flowing under Harringay

In response to a post yesterday about the old council depot on Wightman Road (opposite Effingham), I posted an outline of the building's history. Walking past today, I called in to see if I could verify a couple of my assumptions.

I was also delighted to discover a manhole cover which I'm pretty sure covers the culverted Stonebridge Brook. You can still hear the brook flowing below - and no, it's not a sewer!

We know that's where the culvert is. Would be fun to raise that drain cover! LBH Flood Team has been given £30k to do the next round of feasibility on Flood Alleviation/Wetlands in Chestnuts Park. That will be partly a desk exercise, but will also have some hard hat/investigating culverts in it. We still don't know where the culvert goes between Green Lanes and where it flows into Falmer Rd as it leaves the park. It's suspected to be in that culvert with the brickwork that you enlarged the pic of. I went to Bruce Castle and found the original 1959/60 contract docs for the culverting, but the maps were no longer with the docs. But they'll need to do water sampling all along its length so they'll def want to lift that cover in the video.

On the other side of the railway, the culvert runs from a point somewhere around the junction of Uplands Road and Weston Park.

There's an interesting exhibition on at the moment in the Museum of London in Docklands called Secret Rivers about the rivers hidden underneath our city. I can't remember if they specifically mention Stonebridge Brook, although there is something about the Moselle which runs near us. There's also a fantasy plan to open up the Tyburn which runs south from Regent's Park, with an architect's map of the route which involves demolishing of a large strip of the West End...

Maddy - The map of London's lost rivers in that exhibition shows the Stonebridge Brook as starting at the junction of Grove Rd and Culvert Rd, where it's joined by the Hermitage Brook, and flowing Eastwards to where it disgorges into the Lea by Markfield Park. The Environment Agency/Thames Water consider only this portion of the Stonebridge Brook to be a "main river". West of this point, ie from its source in Crouch End to Culvert Rd, it's considered a stream, and is therefore the responsibility of the local authority.

BTW I think this link to the current exhibition works https://www.museumoflondon.org.uk/museum-london-docklands/whats-on/...

It may not be intended as a sewer, but a Thames21 investigation into the water quality of the River Lee and it’s tributaries (back in 2011, pre Moselle cleanup) found the Stonebridge Brook to have “the worst water quality of all the watercourses that were analysed”, primarily due to domestic sewage misconnections. If nobody even knows exactly where the culvert runs, how is the situation going to improve?

Hi Tris, I'm no expert, but I think that because they only had one sample from Stonebridge they discounted consideration of it from much of the analysis in that report, though what they did discover isn't marvellous I agree! It's clear that more research and cleansing is needed, hence our current campaign. Whether a river is underground or on the surface, it still disgorges eventually into the sea, in this case the Lea then the Thames, so it's worth sorting all misconnections and pollution, whatever the outcome in relation to surfacing it in Chestnuts Park.  As far as I understand, it's government and council policy to surface rivers where possible, both for public amenity and so that pollution incidents are immediately visible rather than hidden.

The work on rectifying domestic misconnections upstream in the Stonebridge Brook has been going on for a while now, and, unlike the daylighting of the Moselle in Lordship, the Stonebridge would not be surfaced until that work is completed. And, as far as I can understand, the route of the culverted Brook is known for its full length from its source in Crouch End to where it disgorges into the Lea, apart from a short stretch between the St Ann's Rd/Green Lanes junction to where it leaves Chestnuts Park at the Western end of Falmer Rd. A culvert survey this January of the large culvert running diagonally across Chestnuts Park found only a storm drain. The Environment Agency has just awarded the  LBH Flood PreventionTeam a grant for further feasibility and research, which will clear up any remaining mysteries and produce options and recommendations for flood alleviation/SuDs/Rain gardens/wetlands etc.  Friends of Chestnuts Park are working closely with the Flood Team on this, and really welcome all input. Email friendsofchesntutspark@hotmail.co.uk, or via here on HoL. It may all turn out to be unviable to bring the Brook up to the surface, but at least we'll have tried!

Ceri, out of curiosity, do you know where the source in Crouch End is located?

My understanding is that the brook is thought to arise to the rear of Hornsey Town Hall in Crouch End. Apparently that location used to collect water running off the higher land to the west. It is thought that the name of the building which used to stand in front of where the town hall now is, Lake Villa, suggests the truth of this.

The 1869 OS map picks it up from a well that stood where Bourne Road now runs past the east of Haringey Park in Crouch End (spelt Harringay Park on the 1893 map). It then forms the field boundaries as it meanders west. Bourne means stream or brook. So the road may have been named after the source of the brook. Where the brook used to enter into what is now Harringay, a bridge was constructed to carry the original Great Northern line over it. That bridge was captured in a watercolour by Harold Lawes in 1885.

Ah.  Thank you Hugh.  The comment about it rising at the rear of the Town Hall rang a bell and then I realised I'd totally forgotten that I have the book Haringey's Hidden Streams Revealed.

Yes, that comes across as a relatively well researched source. 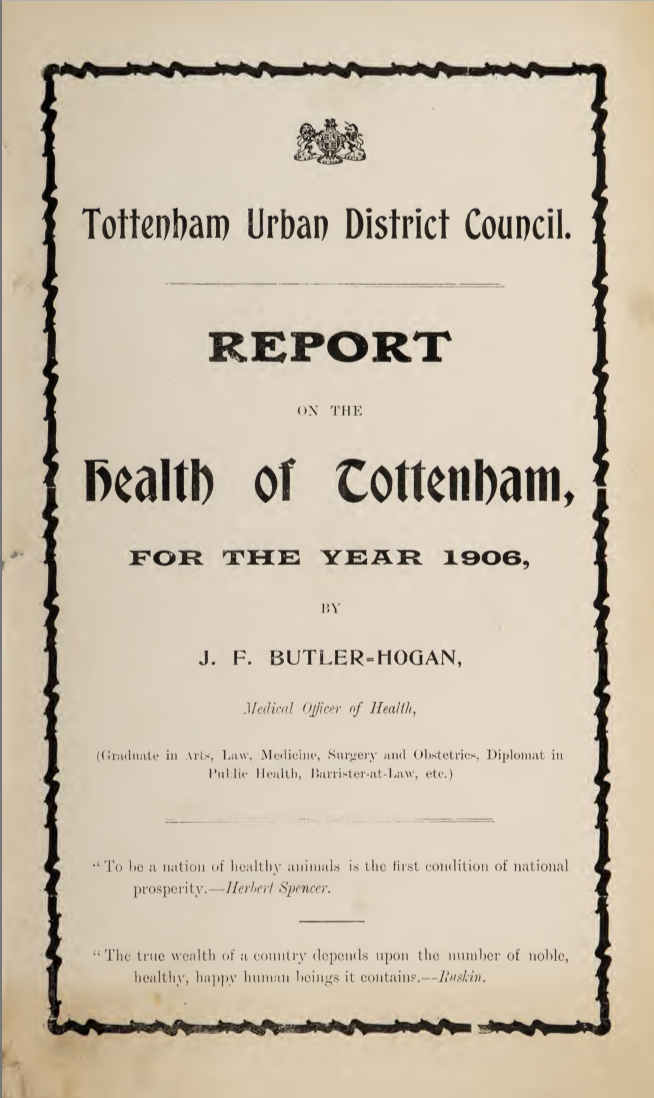 I had a little poke around the web and came across this.

In the early 1900s, Councillor P.B. Malone, J.P., formerly Chairman of the Tottenham Urban District Council, was one of the four representatives of the Harringay Ward and a member of the Council’s Public Health Committee. Its 1906 Report on The Health of Tottenham opens with the following:

To the Chairman and Members of the Tottenham Urban District Council

I have the honour to present my sixth Annual Report upon the sanitary condition and vital statistics of Tottenham.

The year 1906 was a trying one in many respects; the exceptionally hot dry weather which obtained generally throughout England from July to October, caused one of the most widespread and fatal epidemics of Infantile Diarrhoea with which the large towns of this country have been visited in recent years, and though your District has—I rejoice to think—suffered less from the scourge than most similarly circumstanced large towns, the visitation has nevertheless left its dark trace here in an increased zymotic mortality. Scarlet Fever was also unusually prevalent for some months, and there are considerable grounds for the belief that the many severe cases of the disease that occurred in April and May were due to imported milk, which had probably received infection at a producing farm more than 100 miles away. It is therefore gratifying—those and other unfavourable circumstances notwithstanding—to be able to report that there has been no increase in the General Death Rate…”

While outlining Typhoid statistics the report refers to the Stonebridge (and Moselle) Brook with the following observation:

“It is a noteworthy fact that 52 out of the 62 cases occurred in the portion of the district “ watered ” by the Moselle and Stonebridge Brooks, most of the objectionable portions of which are now fortunately being culverted.”

Amongst the public health improvements made during 1906 it reported:

The works under consideration included:

(a) Culverting the Stonebridge Brook between Chestnuts Estate and Culvert Road

(b) Culverting the brook rear of houses in Hermitage Road.

On the Harringay Ward it reported

“The Harringay Ward once more occupies the proud position of being the healthiest Ward in Tottenham; its general death rate for the year amounted to 10.36 as compared with 9.17 in 1905. The chief causes of death in the Ward were Heart Diseases (25), Diarrhoea (20), Tubercular Diseases other than Phthisis  (17), Pneumonia(17), Cancer(14), Bronchitis(12), Prematurity(11), Consumption (8), Scarlet Fever (4). There were no deaths from Diptheria, Enteric or Puerperal Fever.”

That echoes what I found and put in this post.