Open-air swimming baths were quite popular in the three old boroughs that now make up Haringey. But the first to be opened was in Alexandra Park in 1876, then, still part of Tottenham borough. But its history seems to have been lost and what is available seems to be poorly researched. So I've added some information, images, newspaper articles and maps below.

Opened in the summer of 1876, the baths were built in the east of the park between the race track and the New River Reservoir. They were a private enterprise within what was still a privately owned park. 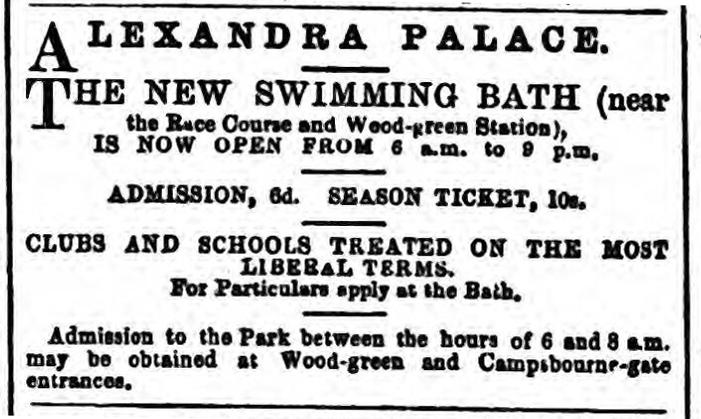 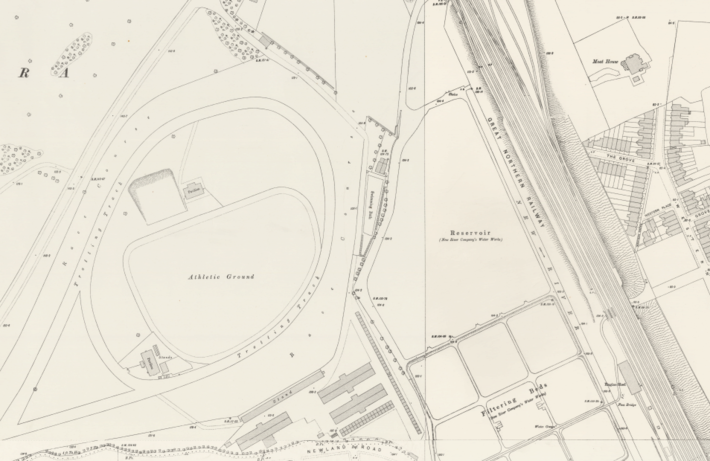 The baths were initially popular but apparently quickly went downhill. There were complaints  about its cleanliness, and even reports of visiting circus elephants and dogs bathing in it!

In the early 20th Century, the Park was taken into public ownership by a consortium of north London boroughs. A campaign led by the Alexandra Park Swimming Club to improve the baths influenced the Metropolitan Borough of Wood Green (established in 1888) to improve matters. In June 1907, the Council reopened a refurbished baths, now named the Wood Green Open Air Swimming Baths. 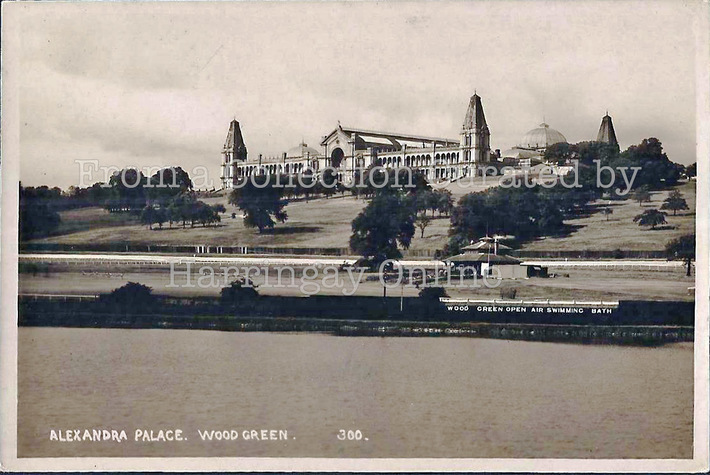 The Baths soon after the re-opening

Aerial shot with Baths marked, 1923 ©Britain From Above The baths remained a popular facility for local people - even opening on winter mornings!

The advent of war in 1939 led to the Palace and Park being pressed into service as a home for Belgian refugees. All amusement activity was halted. Sadly the baths never reopened. The Ordnance Survey map surveyed less than fifteen years after the war shows the pool buildings as ruins. There were four other open-air pools in the three boroughs:

Durnsford Road Lido in Durnsford Road N22 which opened in 1934 and closed in 1988. The Sunshine Garden Centre now occupies the site. Most of the original architecture is still in  today at the Garden Centre, with the changing rooms still in use as the potting sheds. American Olympic swimming champion and 'Tarzan' actor Johnny Weissmuller once visited the pool. Closing in 1988.

The first of the pictures below (which I originally mistakenly attributed as being a picture of the baths near Wood Green Station) is labelled Wood Green Baths.

Below is the entry for these baths in the Kelly's Directory for 1938. I think the Wood Green name was promoted by the Council because it was they who built them. 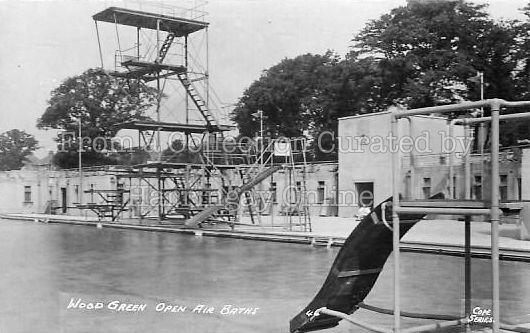 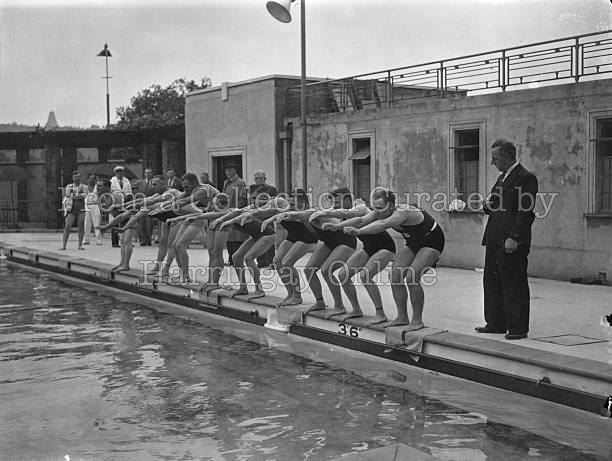 Tottenham Lido in Lordship Lane N17 which opened in 1934 and closed in 1985. The pool was designed to be heated - making it the sixth pre-war lido in London to be originally heated. The site was redeveloped as Lido Square.

Tottenham Marsh Swimming Pool N17 which opened in 1905 in the Marshes near Stonebridge Lock on the River Lea. It was demolished in 1939. 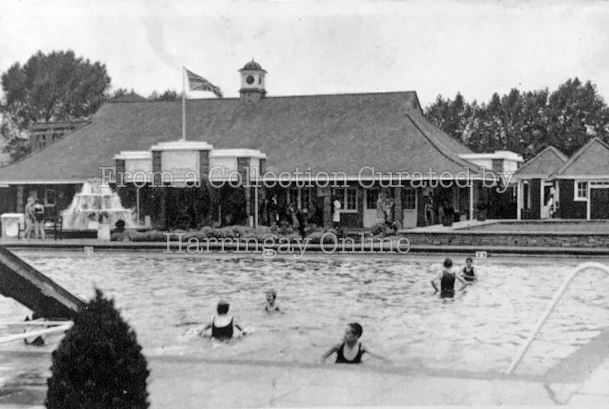 Another fascinating piece of research, Hugh!

Most interesting, Hugh.  Thank you!  How many elephants would it take to close a swimming bath?

Great  info Hugh. My mum, born 1924, used the derelict pool as a kid along with others on Campsbourne estate. They bunked in, didnt pay. She said it was dirty, concrete sides all broken. By 1970s it was filled in bit the concrete edges still visible

That's interesting. You say derelict. Both the photos I have (above) and Kelly's have the pool as still active up to the war. So, I take it that it was derelict but still open when your mum used it?

I posted a link to this discussion on the AP Neighbours forum. Forum member Alex King added this photo of the remains of the Baths, shot in 2015. I repost a colour-corrected version below with Alex's permission. 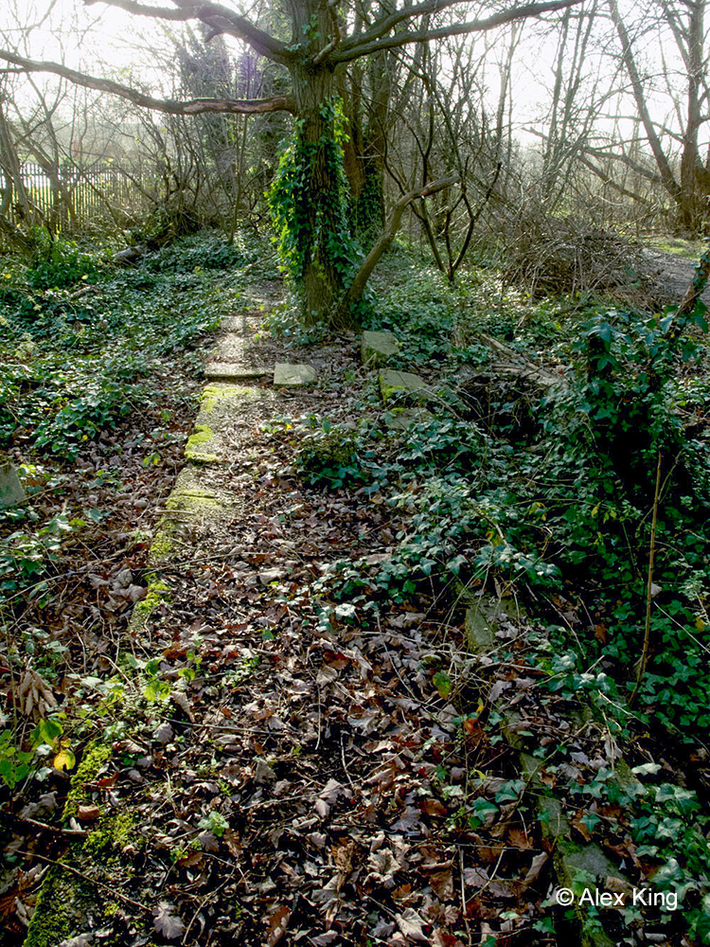 Brilliant piece of work. Fascinating that Ally Pally was at one time in Tottenham Borough! Did Wood Green no exist at that time?

Good to see Hornsey pool get a mention - I spent a lot of time there in the late 50s and early 60s. And Tottenham Lido.

Thanks, Richard. Yes Wood Green is an old Village. Local historian Albert Pinching gives its origins as being in the 12th Century.

Thank you Hugh for a very interesting piece. I did not know there was a swimming pool in the grounds of Alexandra  Palace park.

Great research and, as always, interesting background history Hugh.  I also had no knowledge of the Alexander Park swimming baths.  However, I spent many happy childhood summer holidays at Crouch End Lido (as we called it) and Tottenham Lido.

Crouch End Lido was the smaller of the two and I have fairly vague memories of the lay out.  It was a mainly concrete affair.  Once entering the turnstiles and bearing right one noticed the "sunken gardens" literally two areas, sunk into the ground and accessed by concrete steps.  Here there was a modest amount of grass where sun bathers would lay their towels and relax in the sun after a swim.  Being the only grassed areas around the pool, these sunken gardens became crowded during busy summer holidays.  The sides of these two areas were at an angle to the base and covered in rocks and fairly colourful, but sparse, rock plants.

Sometimes, not wanting to climb the stairs out of the gardens a "youngster" would climb up the sides using the rocks to help ascent - I think I tried it once and stubbed my toe causing pain, a small blood loss and huge embarrassment.

Further to the right there was a "paddling pool" for younger children and this had wooden bench seats around it - this was where my Mum used to sit and chat with her friends while we, the children, played in either of the pools, depending on our age and swimming ability.

Tottenham Lido was the lido of choice: it was approximately double the size of Crouch End, offered a choice of two chutes (slides) and varying height diving boards.  Each end was about 1 metre deep and the "deep end" was actually in the centre of the pool.  The chute at the shallow end was suitable for less confident swimmers as was the diving board.  But the piece de resistance was the tiered diving platform in the centre of the pool: the higher the climb the more experienced the diver.  I think there were three diving platforms and I may have managed once, as a dare, to climb the stairs to the second height, before climbing back down again!  I remember watching much braver souls than I "belly flop" from the first  or second platform.  Clearly the top diving board was for, almost, olympic style divers/swimmers.  I remember it as an experience worthy of an audience as if one of my friends used the diving board, we all watched.

Like the Park Road pool (visible in the photo), Tottenham Lido also had a fountain near the inside entrance. This was purely for ornamental purposes and clearly stated: "Do not climb into or stand under the fountain" - but there was occasionally someone who would flout the rules and once caught by the life guard would be removed from the pool.

There were huge concrete areas at either end of the pool, along with areas around its length and it was here we would lay our towels and leave our bags and packed lunch.  It was pretty uncomfortable laying on a towel with concrete underneath it - we used to use our bags as a pillow; we didn't notice the discomfort: we were in the open air, with friends, young and carefree.

I remember the summer of 1969 being particularly sunny and I visited Tottenham Lido every day of my six week school summer holiday.  Besides the entry fee, I took 1 shilling: 6d for a bag of cheese and onion crisps and 6d for an ice lolly.  It was my final school summer break as in 1970, at the age of 15, I began work.

I enjoyed reading this, Lydia.  What a memory you have for detail!

Thanks for putting my memories into words. We had fabulous summer days at Tottenham Lido in the 60/70s, where "muscleman" Eddie Pengelly could be seen parading himself by the fountain.