Haringey Park - One and Three Quarter Centuries of Change

Haringey Park is the oldest residential road in Crouch End and it contains what are perhaps my favourite houses in that part of Town.  I've finally taken the time to understand why it is the way it is today and how it got there. That story is shared below

Haringey Park was the first road to be developed in Victorian Crouch End, with the first houses let by the late 1840s. By 1861, fifteen houses had been built and by 1871, the number had increased to 25, including two across the end of the road surrounded by very large gardens. Most houses were mid-Victorian villa type houses, with a dozen or so rooms.

Later sale and rental patterns suggest that the houses were probably built and largely owned by investors. For example in 1899, numbers 13-25 were offered for sale in one lot. A few years later, numbers 24 to 29 were sold in one lot.

Claims are made elsewhere that the road was originally gated. That may have been the case for a short while and I'm open to the possibility. However, such an arrangement is not shown on either of the detailed mid or late nineteenth century Ordnance Survey maps; neither it is mentioned in any of the mid or late nineteenth century sales and letting advertisements I have, which wax lyrical on other details concerning the desirability of the road. Nor have I seen any other evidence to support it. 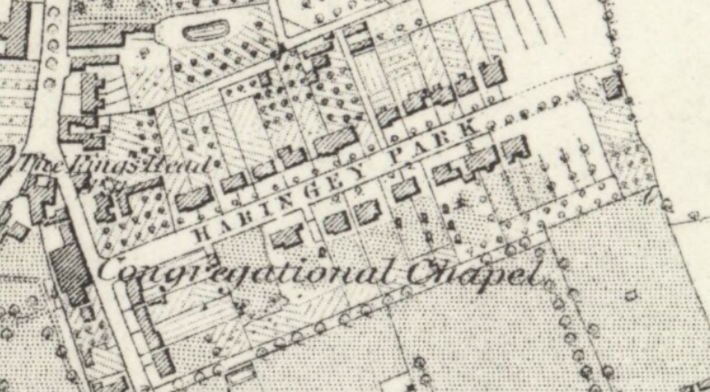 During the early decades of development, the road was home to a range of well-to-do-residents. In 1861, four of the fifteen heads of household were living on independent means, five were in the professions and five were successful merchants. The fifteenth was, rather incongruously, a police constable. All households but the policeman's had between one and three staff, most commonly general servants, housemaids and cooks.

Those early houses include my favourites, numbers 13, 14 and 15.

In 1855 Park Congregational Chapel was opened on Crouch Hill facing the end of Haringey Park. A mid-Victorian community was now complete. 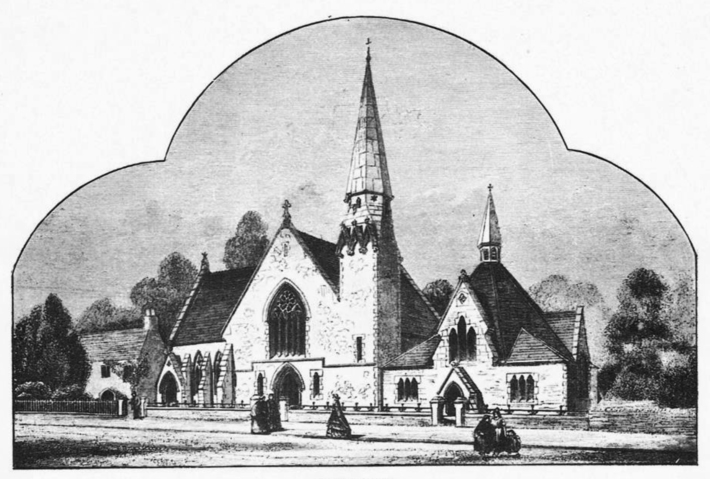 Park Chapel on Crouch Hill, c 1875. The Chapel amalgamated with Ferme Park Baptist Church to form Union Church,
Crouch End in 1974. This building was then split in two, Half was bought by Dave Stewart of the Eurythmics and used as a recording studio; the other half continued to operate as a church. Both uses continue to this day.

Things did not stand still for long in Haringey Park, however. By the last decade of the century, the road had already begun to change. The number of houses increased from 25 to 42 and at the Crouch Hill end, further development had begun.

The last house before Crouch Hill on the south side the road, had belonged to Reverend John Corbin, the Pastor for Park Chapel. After his death in 1890, the house was sold and along with the neighbouring vacant plot provided the land for the development of what are now numbers 35 to 42 Haringey Park as well as for Ivy Gardens. The advertisement placed for the sale of Corbin's house gives us a little sense of what it might have been like (although the five minutes walk to the station claim, suggests that not everything in it should be taken at face value!).

Corbin had been the pastor for Park Chapel from 1856 to 1871. His passing was mourned by the congregation and he was commemorated with the building of Corbin Hall in 1892, replacing the former school building, seen on the right on the picture above. (Previous changes in the 1860s, 70s and 80s and had already enlarged the southern portion of the chapel and altered the main entrance). 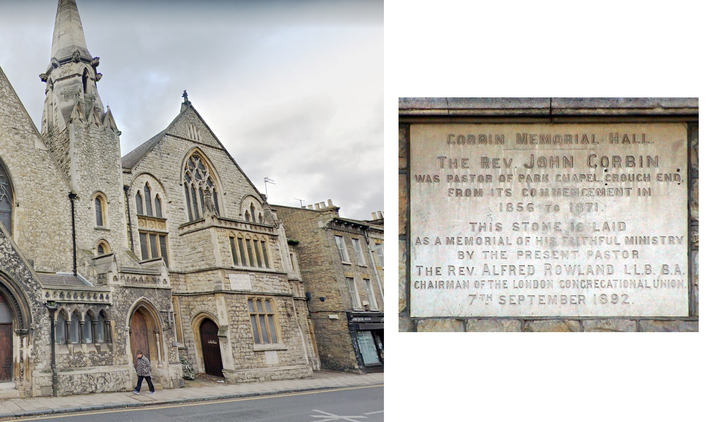 Although the new houses were built on a more modest scale, than the earlier ones, they were still a good size, with ten or eleven rooms in each.

The grainy photo below shows a still leafy Haringey Park. The new terrace of houses on the site of Corbin's house is on the right. On the left, where the library now stands, are the leafy gardens of the earlier buildings. 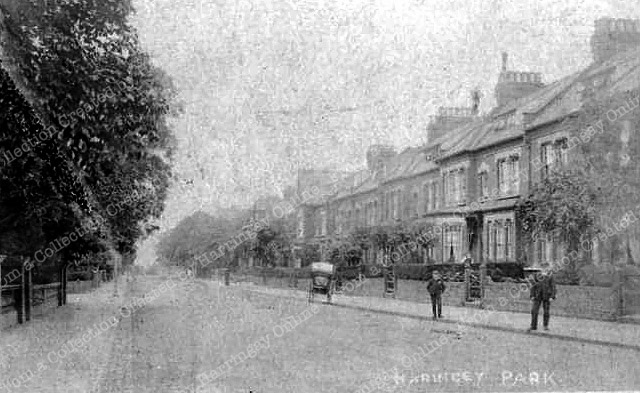 The next, rather clearer photo is shot in the opposite direction, showing the new terrace on the left and Park Chapel on Crouch Hill in the centre. Haringey Park, c1900. looking west toward Park Chapel on Crouch Hill. The late nineteenth century
terrace of houses is on the left.

On the north side of the road two pairs of semi-detached houses were built, just around the corner from Crouch Hill.

The late nineteenth century development at the Crouch Hill end of Haringey Park is shown on the 1893 Ordnance Survey map. You'll note that the map shows Haringey Park as Harringay Park. Anyone who knows anything about our local history will know that the spelling of Harringay/Haringey is a vexed question that has occupied far too much of people's time. For present purposes, suffice it to say that the overwhelming majority of contemporary local references used the -ey form. One can only assume then that the usage of the -ay spelling on this map was an oversight. 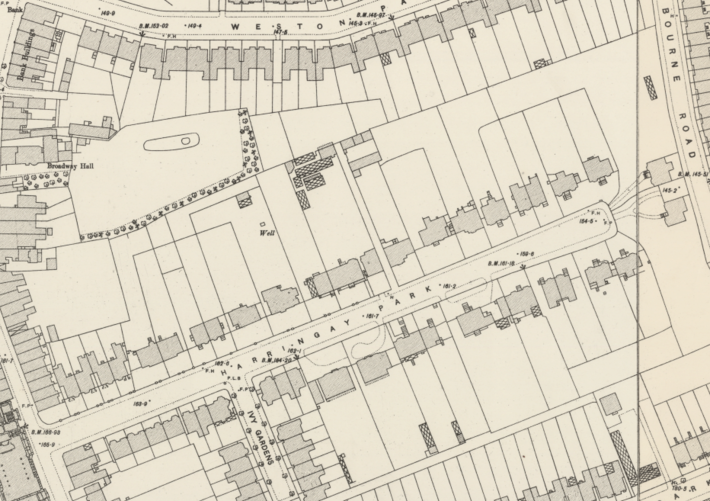 Changes at the Crouch Hill End were completed by the end of the century with the laying out and development of Hatherley Gardens.

The subsequent development phase shifted to the far end of the road. The mid-century villas that stood on the eastern hundred yards of the road were sold in two lots. Bourne Road was laid out and connected to Haringey Park, necessitating the demolition of the two villas that had stood at the end of the formerly close-ended road. On the south side, numbers 25 to 39 were demolished and on the north, 13 to 22 were sold with some later to be converted to flats.

The houses on the southern side were replaced with two mansion blocks called Ravensdale Mansions. Next to them, Sandringham Gardens was laid out and two pairs of late Victorian semis were erected. 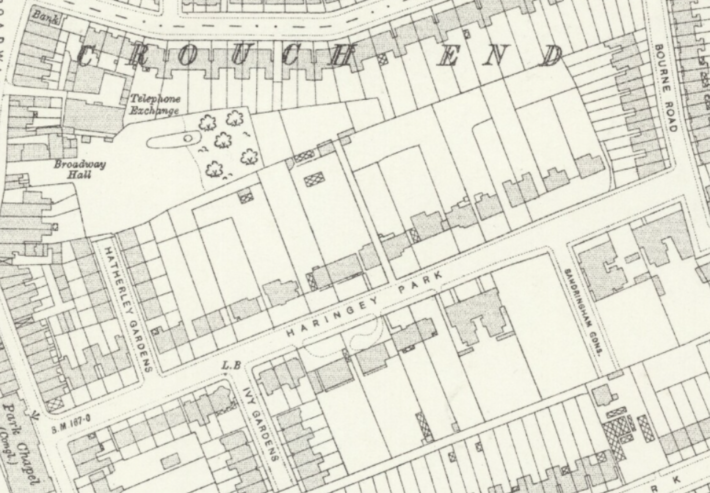 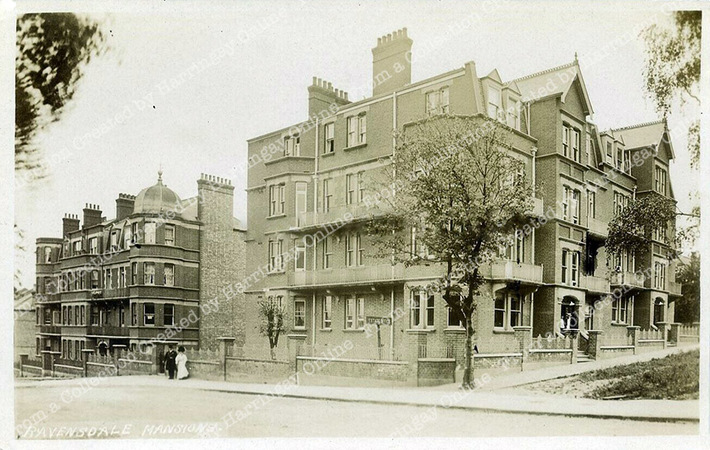 The once tranquil and sparsely populated road had changed significantly in nature. The 1911 census suggests that the type of occupants had changed too. Whilst there were still one or two people of independent means, the merchant and professional occupants had, by and large, moved on and the road had become more clerical and commercial.

The occupant group in 1911 included commercial travellers, articled clerks, a dressmaker and a builder. One house was described as a boarding house and one was running as a nursing home.

But bigger changes were also afoot. We know from an advertisement for sale placed at the end of the nineteenth century that numbers 13 to 23, on the north side of the road, had been sold as a single lot. This unified ownership had clearly allowed for the easy development of the land for purposes other than residential. Half of the long gardens of numbers 13 to 18 were sold and given over to light industry. In 1919, a business called Slabs Ltd was established. The owners described their business as follows.

To acquire and carry on the business of manufacturers and dealers in building materials and appliances.

By 1925, the premises had been taken over as a car service facility run on behalf of Morris Motors. By 1929 it had been taken over by Lyne and Wagstaff, and run as Morris's North London Service Centre. In 1948 the firm moved to 3 Crouch End Hill. They moved again soon afterwards to 163 Tottenham Lane (until recently this premises was being run as Kwik Fit). The Haringey Park property was sold and run as a coach building works.

Just to the west of the motor business, the land was acquired by the Borough of Hornsey and, by 1935, the new Hornsey Town Hall was up and running.

Just to its east a small cluster of buildings was erected to serve as the new Borough of Hornsey School Clinic.

In 1937, the Borough bought numbers 9 and 10, Haringey Park and demolished the houses. After leaving the land empty during the war, the space was developed as a small park shortly after the war. 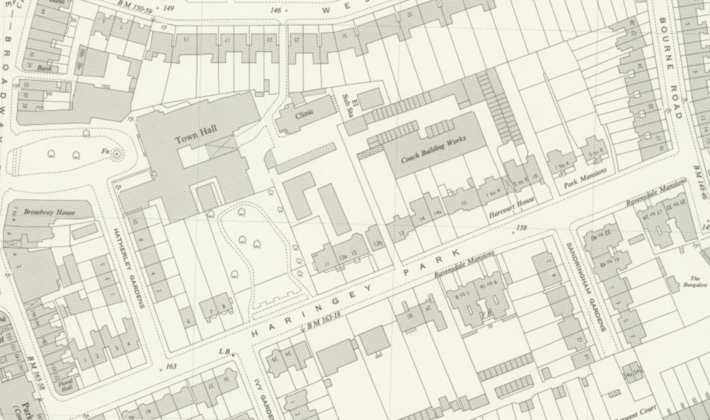 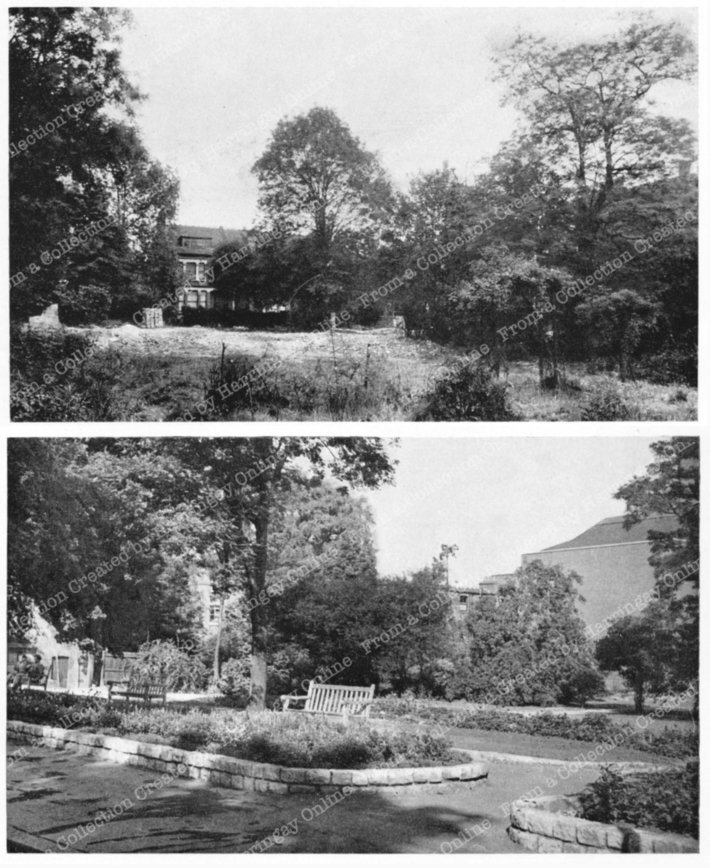 The land bought in 1937 and developed as a park after the war. In the top photo,
the house in the background is 34 Haringey Park

In the 1960s the Borough bought numbers 6, 7, and 8 to the west of the small park and numbers 11 and 12 to its east. The land was used for the development of the new Hornsey Library. Built between 1963 and 1965, it opened just as Hornsey was being amalgamated into the new Borough of Haringey.

During this period the borough also acquired number 32 Haringey Park, opposite the library. This building was used used as a children's care home from 1963 until the early years of this century, when it used the name of Haringey Park Children's Home.

During the later part of the last century, the industrial usage to the east of the Town Hall ended and by 2003, it was developed as flats in the clumsily-named Primezone Mews. The world is not finished with changing Haringey Park yet. The latest phase sees the redevelopment of the old town hall as a hotel and flats.