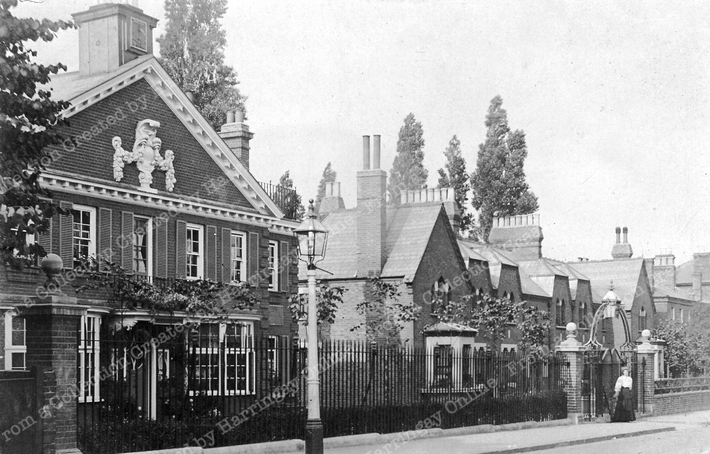 The Shoreditch almshouses are so called because they were originally sited in Shoreditch. As the City grew in the mid-Nineteenth Century, the trustees began to move the houses out to Wood Green.

There were three parts to the almshouses. The first to be moved were the Fuller's Almshouses in 1866. The plaque put up to commemorate the new alsmhouoses carries the following inscription:

These Almshouses, being Fuller's Hospital for twelve poor women of the Parish of St. Leonard, Shoreditch, London, were built and endowed by Judge Fuller AD 1598. They were originally erected in Old Street, Shoreditch and subsequently further endowed by John Eomans, Hanna Savage, James Vinson of Shoreditch and Thomas Cooke and, on rebuilding, by Charles Pitt and Jeremiah Long. 1866.

"These houses were erected upon land purchased by the Charity Trustees for the use of four married couples who formerly occupied a building in the Old Burial Ground, Hackney Road, Shoreditch and known as the Hackney Road Almshouses.

"Adjoining are houses for the accommodation of sixteen Almswomen who were removed from a building which formerly stood upon a site in Old Street, Shoreditch ( opposite the Town Hall ) which site was sold to the Metropolitan Police Authorities in 1902 and known as Porters and Walters Almshouses.

"The above mentioned with adjacent buildings occupied by twelve women and known as Judge Fullers Almshouses now constitute the whole of the Almshouse Charities in the possession of the Shoreditch Charity Trustees."

In the photo, St Lenard's House is on the left. The Fuller's Almshouses are on the right. As can be seen on Google Street View, these were rebuilt in 1962.

The Porters and Walters almshouses were built behind the first two. The houses were named after their original benefactors, Thomas Porter and John Walter.

The Walter's almshouses were originally founded in 1656 under the terms of the wills of John Walter and his widow Alice.  Originally catering for eight almspeople, jointly appointed by the Company and Shoreditch parish, the almshouses were extended through the gift of Thomas Porter in 1826 and the entire site rebuilt on the site of the present Old Street Magistrate's Court. Walter had been a clerk to the Drapers' Company. This company originally administered them. 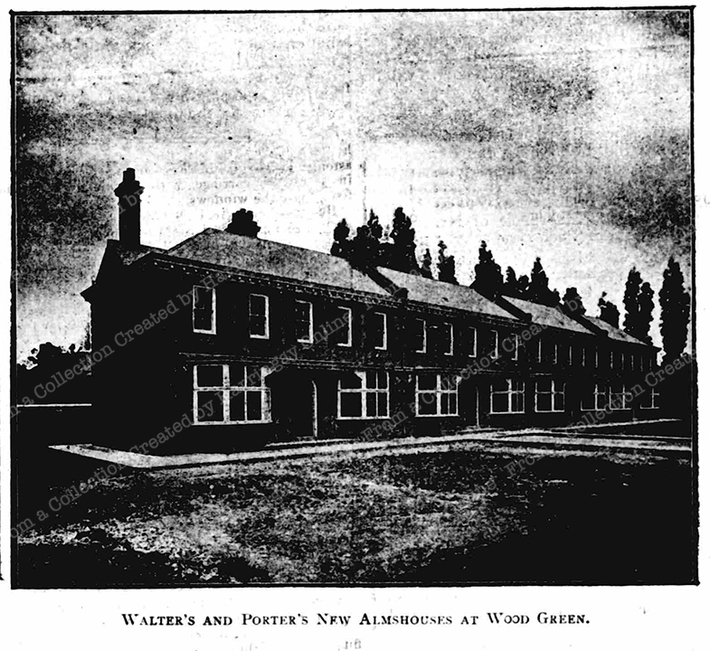 The article below (from which the second picture above is taken) appeared in the Shoreditch Observer shortly before the new almshouses opened in 1904.

As the new almshouses at Wood Green are to be formally opened on Thursday next by the Mayor of Shoreditch, Mr. H. B. Bird, J.P., it will be appropriate to draw the attention of our readers to some of the main features of this excellent work. Happily, we are enabled by the courtesy of the Charity Trustees to reproduce three capital pictures. One of these recalls the old cottages in front of the Town Hall, with their refreshing foreground of trees and shrubs. They were almost the last bit of Old-street and about the only place that one could associate with the gushing Mr. Guppy and his visits to the Old Street-road. The other two illustrations give a very clear idea of the admirable work lately completed by the Charity Trustees.

Since Judge Fuller's houses were removed up to Wood Green there had remained round about them vacant plot of land. It was a district of villas and large houses, and no one cared build upon the vacant piece of greensward. This was fortunate in the long run, for when, in the modern development of Shoreditch, the remaining homes were crowded out by the growth of the City, the Trustees were able to transplant them on the vacant plot up on the hill.  We now have the whole of the almshouses managed by the Trustees concentrated on one spot. The many advantages of such a plan are obvious. The houses are prettily situate in Nightingale-road, environed with charming lawns and gardens, forming altogether a very homely and comfortable colony. The homes are built as dwellings should be, with green in front, a strip of greensward between the blocks, and yet another strip behind. The colony is also adorned with about a score of graceful poplars which add to the charm and healthiness of the surroundings. From their balconies the old folks have good view over some well kept gardens, which are not likely to come within the maw of the builder, while the main thoroughfare in front is very quiet and select. The front block, called St. Leonard’s House, is a substantial and attractive building and admirably designed for its purpose. It will replace the Old Watch House in Hackney-road, and will accommodate three aged (married couples, with additional rooms for the caretaker. It has hitherto been the rule when Darby died for Joan to continue making her tea in the old habitation. In future the survivor will remove as opportunity offers to one the tenements built for a single person, leaving the larger tenement available for another married couple. In a line with St. Leonard’s House is the older set of dwellings which commemorate the good deeds of Judge Fuller. They may remind visitors of the distressed Pickwick in his nightcap and the maiden lady and her curl papers. These homes were evidently built before the custom of going to bed with curtains drawn had gone out of fashion. In short, the old ladies have  a sitting room, the bed being placed in a narrow recess, covered during the day by a curtain. Dr. Oliver, who is one of the present Trustees, was no doubt one of the first to condemn this arrangement, and in the new houses folks sleep and take their rest like ordinary mortals. The Architect, Mr. A. W. S. Cross F.R.1.B.A., took a good deal of interest in his work, and his excellent designs have been admirably worked out by the builder. Mi. C. Gray Hill. One picture shows the new Walter's and Porter’s Almshouses, at the back of St. Leonard's House. They are very comfortably arranged, the old ladies have already moved in with their “bits o’ things,” though some of them will tell you that they are not yet quite straight. Note the roomy bay windows, where the old dames may keep a bird or a few flowers, and through which their rooms are flooded with light and sunshine.

Internally, the homes are very convenient, being fitted on the most modern and improved i principles. Entering by the door into the hall you find a self-contained flat on the right, and another on the left, with similar apartments overhead, approached by a short flight stairs, for the more able-bodied women. Look at the picture again and imagine a hot summer day: one remaining requirement may be expressed in the choice language of Goldsmith,—

“The hawthorn tree, with seats beneath the shade,
For talking age or whispering lovers made.

The old couples may still lovers, or Mrs. Jones may find in Miss Brown the best friend of her life. Think, dear Councillor, how they will bless your name for a comfortable seat. A bowery ash would look nice, and the Borough Council will doubt send up creeping ivies for the boundary walls and hardy annuals to deck the sidewalks with life and colour. And here we may hope that many a honest, hard spent life will be lengthened out with peaceful, happy days. Quicker travel will gradually shorten the distance between Shoreditch and the Home on the Hill, and it will be pleasant to think that up there some lives are being pleasantly prolonged, for as we improve our acquaintance with Old Father Time one of our chief desires is to “husband out life’s taper to its close.”

Thanks Hugh, that’s an interesting story and reminder about the almshouses. Just to check that they still exist, and to give myself some solitary exercise, I cycled to Nightingale Road this afternoon and was pleased to see they are still there! See photos attached.

Appear in good order and look quite attractive for a rebuild.