Views across Manor House from Hostel for Deaf Ladies, c1920 with a Little History

In 1919 the Brunswick House Hostel for Deaf and Dumb Girls was founded at 19, Beaulieu Villas, Seven Sisters Road, Manor Gate, just one house away from the Manor House crossroads.

A moving spirit behind the foundation, and its resident keeper was Mrs Herbert Jones, the wife of the Rev. Vernon Jones, Chaplain to the Deaf in North London.

The hostel aimed “to provide a safe and comfortable home for deaf and dumb girls who are alone in the world, or whose relations are unable, or unwilling, to look after them.” (Annual Report 1929, p.1).

The photos below, which were taken in or from the hostel, provide some unique street views of the area in about 1920. (They can be enlarged by clicking on them - and then clicking again). 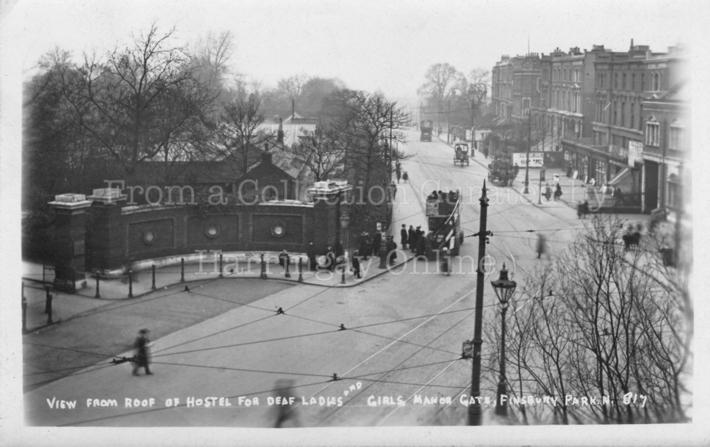 This photo is looking north along Green Lanes. Just cut off on the extreme right of the photo is the Manor House Tavern. The first building shown on the right is 318 Green Lanes, once the home of an aircraft manufacturer. Next comes the terrace of Victorian shop-houses (322-324) which survive today. Then, also surviving, the Victorian houses at 326-334. After Woodbury Grove is The Finsbury Hotel, now the Finsbury Park Tavern. The terrace of houses at 338-352, which used to stand just to the north of the Hotel/Tavern (and occupied by Northumberland House hospital), were demolished along with Northumberland House when the Rowley Gardens Estate was built in the 1960s. In the distance, behind the trees, you can make out the chimneys of Northumberland House. Here's a similar view shot from the ground on the same period. (Any ideas of the name of the show on the poster on the wall between 324 & 326? It looks like Happy Tree, but Google returns no results for it) 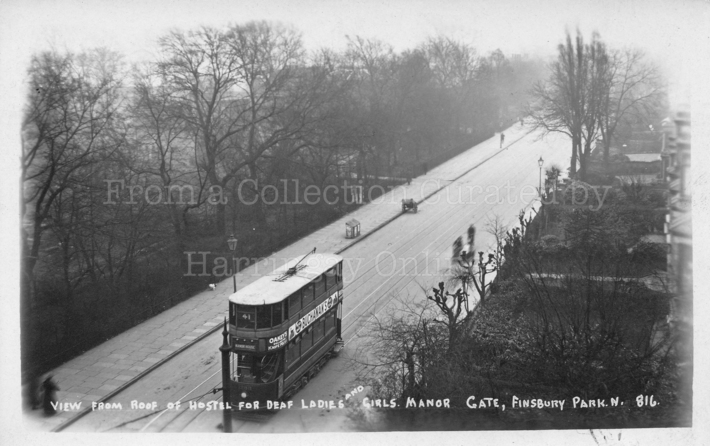 This photo, shot from one of the the rear rooms of Beaulieu Villas, is looking south-east across Green Lanes, to the south of the crossroads. The house behind the trees was a large house called Brownswood. 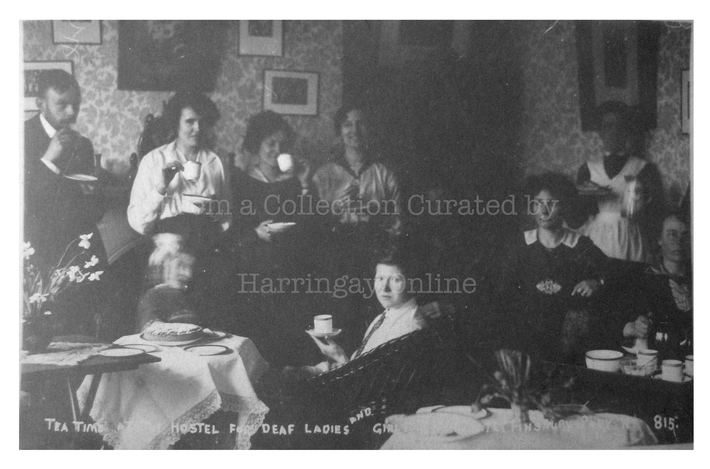 Ladies in the Beaulieu Villas premises. On the extreme left is photographer and campaigner for deaf provision, Selwyn Oxley.

In August 1930 the hostel were given six weeks notice to leave Beaulieu Villas as they were required by “in connection with the new Tube Railway Station that will be built at Manor Gate, Finsbury Park” (Annual Report, 1930 p.3). The hostel were fortunate to find a house just round the corner at 321 Green Lanes. 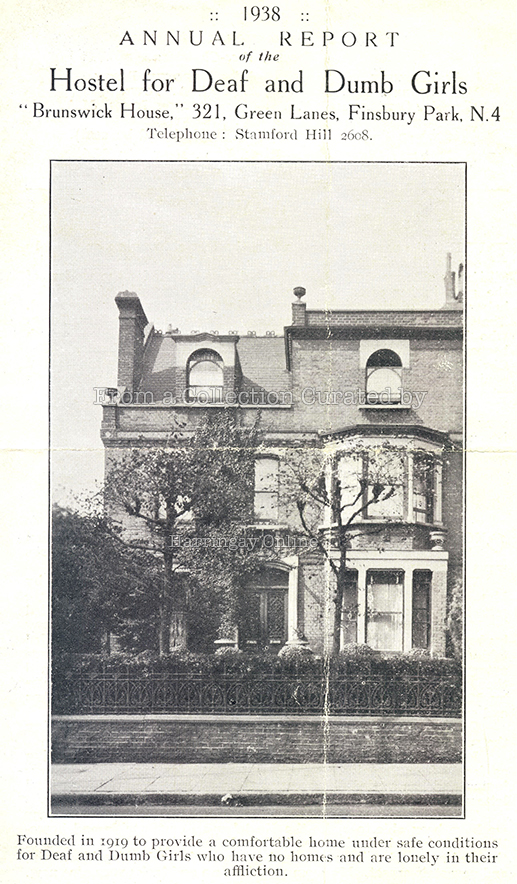 Number 321 is one of the few Victorian houses that has survived on Green Lanes between Seven Sisters Road and Clissold Park.

Just opposite the new premises was the St. John of Beverley Centre (shown on the 1938 OS map as the Deaf and Dumb Church and Institute). Established in 1913, this establishment also survives as the St John’s Deaf Club, albeit in a new building. (In fact, the building has been rebuilt several times after fires. The most recent being in 2000 which closed the Club for ten years).

Fascinating, Hugh, thanks for posting. The name on the poster is, I think, Harry Tate, a music hall performer from around that time.

Just added to the original post are links to two shots of the same locations already on HoL (I'd forgotten about them). One is added towards the end of the description under the first photo. Another is added between the second and third photos.

Church & Institute of St John of Beverley for the Deaf & Dumb.

Royal Association in Aid of the Deaf & Dumb.